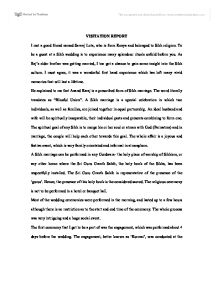 VISITATION REPORT I met a good friend named Savraj Lota, who is from Kenya and belonged to Sikh religion. To be a guest at a Sikh wedding is to experience many splendour rituals unfold before you. As Raj's elder brother was getting married, I too got a chance to gain some insight into the Sikh culture. I must agree, it was a wonderful first hand experience which has left many vivid memories that will last a lifetime. He explained to me that Anand Karaj is a prescribed form of Sikh marriage. The word literally translates as "Blissful Union". A Sikh marriage is a special celebration in which two individuals, as well as families, are joined together in equal partnership. An ideal husband and wife will be spiritually inseparable, their individual pasts and presents combining to form one. The spiritual goal of any Sikh is to merge his or her soul or atman with God (Parmatma) and in marriage, the couple will help each other towards this goal. The whole affair is a joyous and festive event, which is very family orientated and informal in atmosphere. A Sikh marriage can be performed in any Gurdwara- the holy place of worship of Sikhism, or any other home where the Sri Guru Granth Sahib, the holy book of the Sikhs, has been respectfully installed. The Sri Guru Granth Sahib is representative of the presence of the 'gurus'. Hence, the presence of this holy book is the considered sacred. The religious ceremony is not to be performed in a hotel or banquet hall. ...read more.

We sang all kinds of songs and everyone danced in joy. The bride's family was invited to the groom's house to join us in the celebration, but that did not include the bride, as she was getting her 'mehndi' applied. Also, the bride is not supposed to move out of her house after her 'chooda' (bangles) have been put on her hands and 'mehndi' has been applied. The next morning was the big day! It was the day of the 'Anand Karaj'. As the ceremony had to be performed in a nearby Gurdwara, we had to depart before noon with the 'barat', the groom accompanied by his family and friends. In the morning, the groom's family member's read verses from the Sri Guru Granth Sahib, and offered their prayers. Everyone performed 'Ardas', the common prayer of the Sikh. The groom was then handed over the ceremonial sword, the 'Kirpan' from his uncle. Everyone then bowed before the Sri Guru Granth Sahib. The groom then received a mouthful of traditional Indian sweets from his family members, representing a sweet start to his new married life. Close family members and friends departed the house together to the nearby Gurudwara, singing traditional wedding songs along the way. Keeping old Sikh tradition alive, it had been arranged for the groom to arrive by horse back. Thus, in the parking lot of the Gurudwara, the groom mounted his horse. As the groom mounted on the horseback, his sisters fed the horse with 'chana dal' and put some decorative hangings around the horse's neck. ...read more.

They then demanded the groom to give them some cash. His mother then poured some mustard oil in the corners of the door. This symbolizes that the groom's mother welcomed the newly weds into the house, and accepted her daughter-in-law with love. Before the bride could enter the groom's house, she was told to drip both her hands in red paint, and place them on the adjacent wall of the house, in order to keep her handprints on this house. She then received a warm welcome into her new house. Other elders of the house then offered presents to the newly wed couple and also asked to play a game, in which one ring were immersed in milk and water, and the couple was asked to find the ring It is said that who ever finds the ring is the one who will dominate the partner in their married life. It was a very interesting game to watch. Assumingly, the bride won! We all then collectively teased the groom, saying that he would have to surrender to his new wife. After some other such games and chatting, the bride and groom were sent to their lavishly decorated bedroom, adorned with flowers. The groom's family presented the guests with small gifts in order to thank them for their attendance and also for their wishes. Overall, it was an amazing experience, and I enjoyed every part of it. It helped me learn a lot about Sikh traditions, and I also got to wear beautiful Indian dresses. At the end of it, it was the most exciting and fun week for me. I absolutely loved it! ?? ?? ?? ?? ...read more.