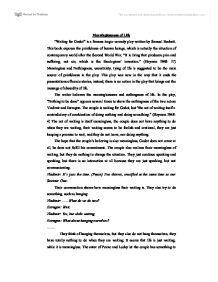 Waiting for Godot - Meaningless of Life

Meaninglessness of Life "Waiting for Godot" is a famous tragic-comedy play written by Samuel Beckett. This book exposes the painfulness of human beings, which is actually the situation of contemporary world after the Second World War. "It is living that produces pain and suffering, not sin, which is the theologians' invention." (Hayman 1968: 17) Meaningless and Nothingness, uncertainty, tying of life is suggested to be the main source of painfulness in the play. This play was new in the way that it ends the presentations of heroic stories, instead, there is no action in the play that brings out the message of absurdity of life. The writer believes the meaninglessness and nothingness of life. In the play, "Nothing to be done" appears several times to show the nothingness of the two actors Vladimir and Estragon. The couple is waiting for Godot, but "the act of waiting itself a contradictory of combination of doing nothing and doing something." (Hayman 1968: 4) The act of waiting is itself meaningless, the couple does not have anything to do when they are waiting, their waiting seems to be foolish and irrational, they are just keeping a promise to wait, and they do not leave, nor doing anything. The hope that the couple's believing is also meaningless, Godot does not come at all, he does not fulfill his commitment. The couple also realizes their meaningless of waiting, but they do nothing to change the situation. They just continue speaking and speaking, but there is no interaction at all because they are just speaking, but not communicating. ...read more.

People felt lost when everything is uncertain, they lost their target and purpose of living, and life is only repetition. In the play, the couple and the passer by are never certain of anything. Forgetfulness makes everything seems to be uncertain, "memory depends on a sense of time. But in an absurd universe, time doesn't exist: it is only one more human, subjective way of trying to impose meaning on the meaningless." (Birkett : 1987: 38) Gogo and Didi are waiting for Godot, but they cannot recognize him even if he comes, they are not certain whether Godot will come that night, whether they are waiting in the right time and right place, they can even forget what they did Yesterday. Just as Estragon said "That's the way I am. Either I forget immediately or I never forget." (P.60) When everything is uncertain, life becomes meaningless, and the waiting of the couple in the play is also meaningless. Godot itself is also full of uncertainty, it is still controversial about who is Godot. Godot can be a symbol representing anything that people are waiting for in their life, which is uncertain and unknown. It seems to be the hope of the couple, because they can be saved only when Godot comes. Godot can the meaning of life, then it is meaningless itself. Many critics would say that Godot represents God, because he has an image of authority which gives hopes and salvation to human beings. ...read more.

Because when you are certain of everything you have no need to put any efforts, you would not have any hope, your life would become dull. I always remember the famous saying of Descartes "I think, therefore I am," that is already my meaning of life, and that is why I know I am living. Thinking itself is not meaningless despite there is no action involved, because through thinking, you can realize your meaning of life. Nowadays, people do not think anymore, they just blindly chasing fortune and fame from womb to tomb, and at the end, they would find their lives meaningless. In conclusions, this book( play) tell us about the emptiness of lives, "Waiting for Godot is dramatic re-enactment of the unrecognized absurdity of the world that is lived and perceived by Beckett's contemporaries." (Birkett 1987: 36) I f we are all blind to the absurdity of the world, then life is not only meaningless, but also a nightmare. People try to escape from meaninglessness, therefore they find all kinds of excitements to make their bright and colourful. People find something to make themselves busy, so that they can forget their sorrows. However, all these are illusions only, these excitements are also meaningless because all people will die anyway. Great books should always raise questions to people, and lead people to think by themselves. Just like this "Waiting For Godot" as a great book, it has no definite ideas, nor any definite interpretations, the writer does not give answer to the questions and doubts. People cannot get any answers from the books, but instead, they would even have more questions to think. ...read more.