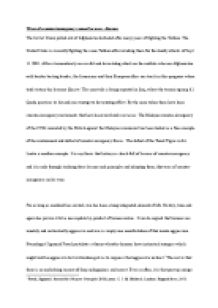 ﻿Wars of counter-insurgency cannot be won - discuss. The Soviet Union pulled out of Afghanistan defeated after many years of fighting the Taliban. The United States is currently fighting the same Taliban after invading them for the deadly attacks of Sept 11 2001. After a tremendously successful and devastating attack on the mullahs who ran Afghanistan with bunker busting bombs, the Americans and their European allies are struck in this quagmire where total victory has become illusive. The same tale is being repeated in Iraq, where the terrorist group Al Qaeda practices its hit-and-run strategy to devastating effect. By the same token there have been counter-insurgency movements that have been text-book successes. The Malayan counter-insurgency of the 1950s mounted by the British against the Malayan communist has been hailed as a fine example of the containment and defeat of counter insurgency forces. The defeat of the Tamil Tigers in Sri Lanka is another example. It is my thesis that history is chock-full of lessons of counter-insurgency and it is only through studying these lessons and principles and adapting them, that wars of counter- insurgency can be won. For as long as mankind has existed, war has been a long integrated element of life. History, time and again has proven it to be inescapable by-product of human nature. It can be argued that humans are innately and instinctually aggressive and war is simply one manifestation of that innate aggression. Neurologist Sigmund Freud postulates a theory whereby humans have instinctual energies which might well be aggressive but civilisation gets us to suppress that aggressive instinct. [1]The cost is that there is an underlying current of deep unhappiness and unrest. Ever so often, it is that pent up energy that bursts out in these periodic conflicts. War is essentially a political endeavour where violence is employed militarily to secure a political victory. World War II has often been viewed to be the pinnacle of all wars, an exemplary tell-tale of the staggering atrocities of war. ...read more.

nation by putting forth ideas and messages that work towards mobilizing a community.? Barker and Kelly further expand that by stating that ?A public that was united could be mobilized for political, social or religious causes. This unification was essential in the nationalist cause, once people could imagine their fellows as sharing a public culture; it became possible to imagine that this public ought to share certain fundamental rights and freedoms.? [15] This platform has emerged to be highly beneficial for insurgents. Now available to them is the widespread of their ideological, be it political or religious, cause. It has become increasingly easier for them to garner attention and support, both moral and financially. Furthermore, modern forms of technology tend to demand an instant and forceful response. Thus it can be argued that because of this, it lessens contemplation and the time to think on the parts of counter-insurgents. The dominant state reacts quickly and though it seems to be defending itself from an uprising that seems to threaten its way of life, stability and cohesion of the community, quick and rash decisions made can help win more support for the insurgents. Hence it is necessary for counter- insurgency to act wisely, sympathetic and appropriately. Technology is a platform that goes both ways. Though classical-insurgency methods have very little to say about modern technology, the same principles can be applied. To counter insurgents on this front, counter-insurgents still need a campaign of moral high ground that can be circulated through the same means of technology to counter insurgent?s efforts on this ground. Colin S. Gray in ?Peace and International Relations? denotes that it is also important for counter- insurgents to have an appealing and alluring political cause to draw in citizens. He points out that though the French Army in Algeria were experts in counter-insurgency, France ultimately lost the war because she lacked the political incentives to propose to Muslim citizens.[16] There was no binding tie both culturally and politically between the French and Muslims. ...read more.

Counter-insurgency movements throughout history have displayed a patchy track record.. The communist march against the nationalist in China and the subsequent attempts by the nationalist government to counter failed miserably because the communist were able to win the minds and hearts of the people. The Taliban continue to survive in Afghanistan despite the massive presence of the US and Nato forces because the terrain are the Taliban?s? best ally. The government of the day and its western allies are not able to defeat the Taliban whose hit- and-run to the mountains strategy is highly effective. In the Middle East, especially Iraq and Palestine, the suicide bombing tactics are impossible to wipe-out. The Al Qaeda operatives mingle with the people and are difficult to spot, and suddenly a suicide bomb goes off to devastating effect. .The Indian government efforts in Kashmir against the Muslim insurgents are difficult to defeat because they are deeply sheltered in the jungles of Pakistan, sometimes under the Pakistan?s military auspices.. Whilst history has thrown out successes such as the Malayan counter-insurgency of the 1950s, the Sri- Lankan government?s blow out of the Tamil Tigers, not all the counter-insurgencies have been a raging success. There are many struggles. One is tempted to draw a religious denominator to the current struggles of counter-insurgencies in the world. In India, the Middle East, and Tibet, the religious fervour, albeit among the minority, has gripped these insurgents and made any success limited and contained for counter-insurgents, who are inevitably governments of the day. The past insurgencies were politically or ideologically oriented ? communism versus democracy. In the medieval years, it was the church versus the people and landowners versus the poor farmers. The shape and form of insurgencies and counter-insurgencies may change through the years but the principles remain constant. It is consistency, decisiveness and learning lessons from the past that often leads to political victories. If these all-encompassing important aspects of counter-insurgency can be hammered into the psyche of civilian and military authorities alike, counter-insurgency undoubtedly stands a chance of overcoming insurgency. ...read more.