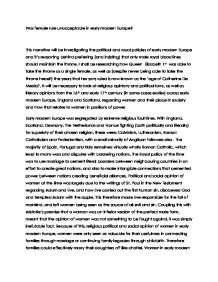 Was female rule unacceptable in early modern Europe? This narrative will be investigating the political and royal policies of early modern Europe and its reasoning behind preferring (and insisting) that only male royal blood lines shou

Was female rule unacceptable in early modern Europe? This narrative will be investigating the political and royal policies of early modern Europe and it's reasoning behind preferring (and insisting) that only male royal blood lines should maintain the throne. I shall be researching how Queen Elizabeth 1st was able to take the throne as a single female, as well as (despite never being able to take the throne herself) the years that her sons ruled is now known as the 'age of Catherine De Medici'. It will be necessary to look at religious opinions and political laws, as well as literary opinions from the 16th and early 17th century (in some cases earlier) across early modern Europe, England and Scotland, regarding women and their place in society and how that relates to women in positions of power Early modern Europe was segregated by extreme religious fault lines. With England, Scotland, Germany, The Netherlands and France fighting (both politically and literally) for superioty of their chosen religion, these were; Calvinism, Lutheranism, Roman Catholicism and Protestantism, with a small minority of Anglican followers also. ...read more.

After Edward took the crown Mary was to follow closely succeeded by Elizabeth. The only other candidate that could possibly take a rightful place over Elizabeth was Mary Stuart, who was currently Queen of Scotland and Queen of France (by marriage), and with the ever looming threat of a two-pronged assault on England by the French and the Scottish, Elizabeth became the necessary and logical choice as the English people were at the time seen to be more 'nationalistic than catholic' (and an exceptional ruler she went on to be), managing to influence both Roman Catholic's and Protestant's into a compromise, which arguably stopped England from falling into a religious war, as was the case in France. But it also conveyed to her public that she was able to accept both faiths and allow them to coexist in the efforts of peace, a feat that had not been accomplished so logically or peacefully by her male predecessor's. France was plagued by its own political difficulties and religious disputes, and having a female singularly ruling was intolerable to them, and with the medieval 'Salic Law' still in force (of which some of its policies are still in use today) ...read more.

France kept with the extremely old salic law, that was first made policy in medieval time's to make sure that only males of French blood from royal lines could ascend to the throne. But it would seem as was the case across Europe and England that Salic law, and English/Catholic opinion and preference on female rule only counted if it suited. If the alternative ruler was unpalatable (for instance Mary Queen of Scots) then the nobles and governments would find alternative methods to crown their ruler of choice. The debate of female rule was never about what was best for France, England or whomever, but quite plainly about those in power keeping that position for as long as possible at whatever the cost. Historic and modern literature written about Queen Elizabeth I, Catherine De Medici, Queen Mary I and Mary Queen of Scots can paint a picture of a very manipulative, autocratic and sometimes capricious class of Queen, but with the severe adversities they faced I feel that as independents they were utilizing their femininity, as well as their individual strong wills and education to keep a firm control. These famous rulers from our history did bring about change, and they forever altered the face of Royalty as well as assisting (even if only selectively) the view of women across the world. ...read more.