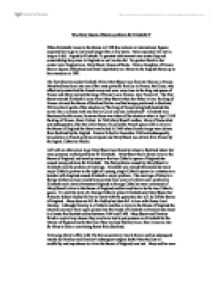 Was Mary Queen of Scots a problem for Elizabeth I?

Was Mary Queen of Scots a problem for Elizabeth I? When Elizabeth I came to the throne in 1558 few national or international figures expected her reign to last much longer than a few years. None expected it to last as long as it did. Arguably Elizabeth I's greatest achievement was controlling and consolidating her power in England as well as she did. No greater threat to her control over England was Mary Stuart, Queen of Scots. First as Dauphine of France then as Queen of Scotland and most importantly as a threat to the English throne up to her execution in 1587. The first threat towards Elizabeth I from Mary Stuart was from her thrown in France. Mary had been born into one of the most powerful families in France, the Guise, who effectively controlled the French army and were very close to the king and queen of France and Mary married the king of France's son Francis, later Francis II. The first threat towards Elizabeth I came from Mary Stuart when her father in-law, the king of France claimed the throne of Scotland for her and had troops positioned in Scotland. ...read more.

Although Darnley is a Catholic and has a claim to the throne of England the situation seems to have again played into the hands of Elizabeth as Darnley sets about to alienate the Scottish nobles between 1564 and 1568. Mary Stuart and Darnley failed to exploit any chance they may have had to put pressure on Elizabeth for the Throne of England and by the time Mary realised Darnley was a foul it was too late for Mary to form a convincing threat from Scotland. Following Mary's affair with The Italian secretary, David Riccio and his subsequent murder by Darnley and Darnley's subsequent suspect death Mary had lost all credibility and any chance to claim the throne of England was lost. Mary and her new lover, Bothwell were made a deal for her to abdicate and leave her throne to her son, James VI. Mary was allowed to go abroad and she escaped to England where far from being less of a problem she became more of one. English Catholics still saw Mary as the rightful queen of England and her physical presence seemed to heighten their attention. ...read more.

In the years that followed Elizabeth faced a number more plots including the 1583 Throckmartan plot which aimed to used Spanish troops and English recusants to put Mary on the throne and the 1585 Parry plot which intended the same. The last plot was the Babington plot where the same as before was intended to happen. Spanish troops and English recusants were to rise and put Mary on the throne of England. The plot was foiled by Walsingham and Gilbert Gifford, who acted as a double agent. Walsingham let the plot run until Mary Stuart was implicated and she could be tried for treason. She was tried at Fotheringhay Castle in October 1586 however her death warrant isn't signed until February 1587 when she is finally executed. Mary may be considered a considerable problem that Elizabeth had to overcome. Elizabeth's delay over the final signing of Mary's death warrant may show some compassion towards her, as she knew that it was setting the precedent for the same to be done to her. However Mary was a problem that needed to be got rid of and eventually her own bad fortune and misjudgement were the cause of her own downfall. John fuller ...read more.