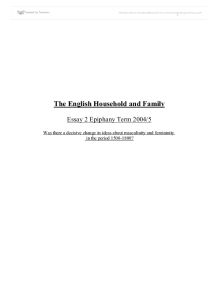 Was there a decisive change in ideas about masculinity and femininity

The English Household and Family Essay 2 Epiphany Term 2004/5 Was there a decisive change in ideas about masculinity and femininity in the period 1500-1800? Was there a decisive change in ideas about masculinity and femininity in the period 1500-1800? Gender roles within a society, the characteristics that we define as masculine and feminine, are not universal or based on the biological differences between the sexes. Laquer argues that "the body is like an actor on stage; ready to take on the roles assigned it by culture"1 Gender roles are not biologically assigned at birth by the sex of a child but instead are a learned, internalised reaction to its cultural environment. This is not to say that the way people view biological sex has no implications for the nature of gender roles, conversely it is the interaction between biological notions of sex and the roles which a society assigns to gender which constitute a perceived idea of what is masculine and feminine. In the sixteenth and early seventeenth century the biological construction of sex differed dramatically from what is now accepted. Medical science greatly relied on the works of classical antiquity which stated that health and temperament were caused by the balance of humours in the body. Prevailing belief was that there was only one sex and children were born male or female due to their balance of humours. ...read more.

"Women were the disorderly sex and their sexuality was to be controlled so that they bore children only within marriage, and then only to their lawful husband."8 Female adultery, which could result in a man raising a child whom he did not father, was severely punished. Men had far more licence to sexual freedom and men's adultery was generally ignored or punished less harshly. Despite the general subordination of women they did gain some power and influence through their economic role in the family. "Women were expected to work for a living [and their earnings were] imperative if families were to survive in any comfort"9 Before the eighteenth century women were seen as an important force in the working world. Women in the nobility and gentry were often responsible for managing their husband's large estates whilst they were away at court. Within the 'middling sort' many women were also involved in important labour; running a shop, manufacturing products or managing staff. Amongst the poor the income brought by a woman into the household could be vitally important and women partook in manual labour in the fields or manufactured goods to sell within the household. Although according to the Common Law the money earned by women automatically belonged to their husbands in practice this did not always happen, allowing women some freedom. ...read more.

The change in perceptions of biology does therefore seem to have an effect on notions of gender. The advent of the two-sex model reinforced patriarchy and the male gender role, giving scientific reasons for male domination. It also seems to have affected the way in which women were perceived and behaved. Whilst exalting their moral qualities it negated their sexual feelings and increasingly left them confined to the domestic sphere. However it is unclear how far these changes actually affected the lives of ordinary people. "Most ...historians would now agree that the period of the industrial revolution was marked more by continuity than change"18 Whilst the reasons for women's subordination were given a new context they were still expected to act in a subordinate and sexually modest way. Equally the male gender role of strength, reason and control over women was reinforced although the new idea of female innocence and morality meant that manners became more important. In reality it seems that whilst the justification for gender differences changed the actual behaviour displayed remained fairly constant. "The evidence over the centuries seems to suggest that there is an essential continuity about human emotion but how it is expressed varies from one historical context to another."19 Therefore, whilst the theory of sexual and gender role encountered a decisive change between 1500 and 1800, the main effect was to reinforce existing gender roles, not change them dramatically. ...read more.