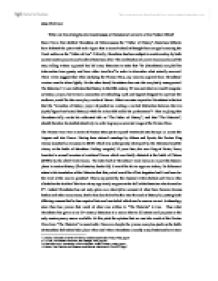 What are the strengths an weaknesses of Herodtus' account of the Persian wars?

What are the strengths and weaknesses of Herodotus' account of the Persian Wars? Since Cicero first dubbed Herodotus of Halicarnassus the "Father of History", historians hitherto have debated the point with such vigour that a second school of thought has emerged renaming the Greek author as the "Father of Lies". Critically, Herodotus has been subject to much scrutiny by both ancient contemporaries and modern historians alike. The combination of proven inaccuracies and the story telling written approach has led many historians to state that "he (Herodotus) compiled his information from gossip and from other travellers"1in order to dramatise what actually occurred. These views suggest that when studying the Persian Wars, any sources acquired from Herodotus' version must be taken lightly. On the other hand, Herodotus does not ride completely unsupported. The historian T.J. Luce indicates that history in the fifth century BC was not what we would recognise as history proper, but in fact a concoction of enthralling myth and legend designed to captivate the audience, much like the exemplary works of Homer. What warrants respect for Herodotus is the fact that the "invention of history proper depended on making a marked distinction between the two (myth/legend and actual history) which he in fact did unlike his predecessors"2. Thus implying that Herodotus fully merits his celebrated title as "The Father of History", and that "The Histories", should therefore be studied attentively in order to grasp an accurate image of the Persian Wars. ...read more.

However these sources cannot take anything away from Herodotus' effort to attain them. It is common knowledge that his travels took him great distances obtaining a large collection of different logioi both named and unnamed, Greek and foreign. Herodotus used a variety of techniques to manage all of his sources, frequently beginning tales "those with a story to tell" then finishing the story only to give his own assessment based on other informant's tales. However evidently many of these stories are wildly extravagant, for example Scyllias of Scione, a famous diver who is reported to have joined the Greek navy at the battle of Artemisium by submerging at Aphetae and swimming underwater for ten miles. Though Herodotus offers it as his considered opinion that Scyllias accomplished the journey on a boat, it is tales such as these that give W. Kendrick Pritchett his main target of ammunition in his book "The Liar School of Herodotus". Here a number of historians including Fehling, Powell and Pritchett argue that the wide range of such tales suggest that the truth behind "The Histories" is diluted by these myth like stories8. It would appear that Herodotus was willing to record all he had been told and put it forward as history rather than determine what actually happened in cases like our area of study; The Persian Wars. However this argument that lies as well as truths were recorded in "The Histories" is overshadowed by Herodotus' own claim; "I feel obliged to tell what is told to me, but I do not feel at all obliged to believe it... ...read more.

We have already uncovered that the Histories were written to grip the imagination of an audience and the audience quite clearly was a Greek one and not a Persian. Though admittedly Herodotus devotes a lot of study to the Persian way of life, it cannot be denied that Herodotus relished the opportunity to describe the bravery of the Spartans at Thermopylae or the tactical acuteness of Themistocles at Salamis. Therefore before we conclude we must consider the level of bias Herodotus may have directly or indirectly had. The conclusion to this question may appear to be straight forward. Indeed having assessed facts, sources, style and leniency it is fair to agree that Herodotus' account of the Persian Wars is not altogether accurate. A sense of dramatisation is a recurring theme throughout the argument against Herodotus as is so proven by the exaggerated facts, the inclusion of many unrealistic sources, the "storytelling" style in which it is written and finally the level of biased leniency towards the original audience. We can gather therefore that "The Histories" is a weak account of the Persian Wars. However, an argument that counter balances this claim is rightly referred to at the end. No matter how inaccurate scholars perceive "the Histories" to be, it still remains one of the only original sources that can tell us as 21st century historians of what truly occurred during that epic phase in history known as the Persian Wars. ...read more.