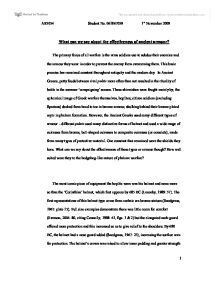 What can we say about the effectiveness of ancient armour?

What can we say about the effectiveness of ancient armour?

The primary focus of all warfare is the arms soldiers use to subdue their enemies and the armour they wear in order to prevent the enemy from overcoming them. This basic premise has remained constant throughout antiquity and the modern day.  In Ancient Greece, petty feuds between rival poleis more often than not resulted in the rituality of battle in the summer ‘campaigning’ season. These skirmishes were fought mainly by, the epitomical image of Greek warfare themselves, hoplites; citizen soldiers (excluding Spartans) decked from head to toe in bronze armour, skulking behind their bronze plated aspis in phalanx formation. However, the Ancient Greeks used many different types of armour – different poleis used many distinctive forms of helmet and used a wide range of cuirasses from bronze, bell-shaped cuirasses to composite cuirasses (or corselets), made from many types of protective material. One constant that remained were the shields they bore. What can we say about the effectiveness of these types or armour though? How well suited were they to the hedgehog-like nature of phalanx warfare?

The most iconic piece of equipment the hoplite wore was his helmet and none more so than the ‘Corinthian’ helmet, which first appears by 685 BC (Lazenby, 1989: 57). The first representations of this helmet type come from archaic era bronze statues (Snodgrass, 1967: plate 15). Full size examples demonstrate there was little room for comfort (Everson, 2004: 80, citing Connolly, 1998: 61, figs. 1 & 2) but the elongated neck guard offered more protection and this increased so as to give relief to the shoulders. By 680 BC, the helmet had a nose guard added (Snodgrass, 1967: 23), increasing the surface area for protection. The helmet’s crown was raised to allow inner padding and greater strength by 530 BC, with the cheek pieces elongated (Everson, 2294: 83). As the helmet had been rounded, it increased the chance of blades deflecting, the padding underneath helping to soften blows.

During the mid 5th century, ear holes were added in order to aid hearing as well as having the cheek pieces hinged (Everson, 2004: 130). By the end of the 5th century BC, the helmet existed only in southern Italy as a corrupted Italo-Corinthian version, (Everson, 2004: 183)[1]. Defensively it was extremely effective, covering nearly all of the face in a single sheet of bronze[2]; but because of this, it offered atrocious hearing (except for the later variant) and vision was severely reduced (Raaflaub, 1999: 133, Hanson, 1991: 67). When hoplites had to move quicker in 4th century BC Hellenic warfare, it was, effectively, redundant.[3]

Other types of helmet included the Illyrian, whose extended cheek pieces protected the neck, guarding effectively against spear thrusts and swords (Everson, 2004: 76). Like the Corinthian, it was eventually made out of one sheet of bronze and modified to have ear holes, yet it too suffered because of its initial impairment of hearing. The Chalcidian helmet was similar to the Corinthian, but had larger cut outs for the eye to aid vision and hinged, rounded cheek pieces to provide enough protection. By 510 BC, it had longer cheek pieces (Everson, 2004: 130). The Attic helmet had larger neck guard with long, straight cheek pieces and alternated between having a high forehead guard or a frontlet with no nose guard (Everson, 2004: 130, citing Boardman, 1980: fig. 98, 154/162/188/191/223-5), offering an equal distribution between vision and protection. Later in the 3rd century BC, a ridge was added for protection: (Webber, 2001: 24).

The Pilos was a common helmet, evolved from the felt cap of the same name. Created by the Spartans, it was light, cheap and gave good vision and hearing (Everson, 2004: 136). Xenophon personally recommended the Boeotian helmet for its vision (On Horsemanship, 3) and it was used heavily by Alexander’s Companion cavalry (Sekunda, 1984: plates A, C & D). The Thracian helmet (appears in 460 BC) had a protective rim at the front to absorb blows from above (Everson, 2004: fig. 50). The cheek pieces were longer and attached by leather, providing a close fit and the ears were left uncovered, thus making an effective helmet, though expensive (Everson, 2004: 139, citing Connolly, 1998: 61, n. 20).

With the advent of the Macedonian phalanx over the hoplite phalanx, phalangites had many helmets to choose from. One of the most popular was the Phrygian helmet, appearing in 400 BC. It was a distinctive helmet, with cheek pieces, a peak and a brow guard (Everson, 2004: 180). Reinforcement crests on the front were added in the 3rd century BC.[4]

The second part of the panoply for the Greek soldier was the shield. Its predecessor was the Dipylon shield, a wickerwork shield. The aspis was heavier (6.2kg – Sekunda, 2000: 10) and stronger because of it porpax[5]/antilabe grip system (Everson, 2004: 172). Surviving examples are about 80cm in diameter and they are made of layers of wood or stiff leather with a bronze blazon and rim (Lazenby, 1989: 58) for added protection.[6]

Since the shield was held by the left hand on the rim, it was only the left side whose shield was projected onto other half (Hanson, 1999: 55; Raaflaub, 1999: 133), thus every man in the phalanx had to protect his right and his neighbours. This lead to the ‘hoplite drift’ where a phalanx moved to its right when crossing the battlefield, trying to cover each other’s weak spot (Thuc. 5.71.1) and keep the line solid - losing a shield was unthinkable.

However, the aspis lip did jut out at a 90° angle and so it could be rested on the shoulder (Hanson, 1999: 68). As a result, the diameter of the shield grew to nearly 3 ft. in diameter, which aided front on protection. The shield’s massive size did allow those to ‘hide in the belly’ of it (Tyrt. 11. 24). The shield shape did itself cut off unnecessary parts, that rectangular shields (like the roman scuta) had and excluded extra weight (Hanson, 1999: 69). The circularity and concavity was a perfect match for the phalanx. In the 5th century, the shields were covered with a thin layer of bronze and had the bowl deepened, which made it stronger (Everson, 2004: 161).

Perhaps the most important piece of armour in the panoply was the cuirass (or corselet). One of the earlier types of bronze cuirass was the ‘bell cuirass’. The Argos cuirass was an example of this type, and it was 2mm thick! The bronze was beaten and then rolled over wires to form a basic shape with outlets (Everson, 2004: 88). Repoussé lines ran down each armhole, lower ledge and the middle of the cuirass, reinforcing the strength of the cuirass (Everson, 2004: 88). The curved form of the bell cuirass would have deflected blows and absorbed direct attacks, but would also have been exhausting to fight in (Hanson, 1989: 55/6; Vaughn, 1991: 53).

Padded linen cuirasses were created in the early archaic period, and although they didn’t offer the same level of protection as the bell cuirass, they were lighter to wear. The only representation of this is an aryballos of 690-80 BC (Everson, 2004: fig. 26). Interestingly, 66% of the figures on red figure pottery were shown wearing the linen cuirass. It is likely that in and about 550 BC, the linen cuirass replaces the bell cuirass, if we are to believe the representations (Everson, 2004: 113). In the 5th century BC, armourers spent much more time on the detail of their cuirasses, paid for by the wealthy.

By 490 BC, the muscle cuirass is on red figure vases. This cuirass dipped at the abdomen instead of the flange on the bell cuirass (Arias, 1962: fig. 144).[7] From 470 BC onwards, pteruges on the armour was worn. Horse owners wore and easily afforded muscle cuirasses, like the example at Bari (Everson, 2004: 144/5, citing Connolly, 1998: 56). The muscle cuirass was tailored to the customer, moulded in fact, so the weight was distributed, allowing the Hoplite better protection and a lighter cuirass (Everson, 2004: 144/5).

The composite cuirass appears about 525BC and was commonly used by hoplites everywhere because it was easier to wear. Connolly’s reproduction cuirass weighs 3.6kg compared to the 6kg of the muscle cuirass (Everson, 2004: 146, citing Connolly, 1998: 58; Vaughn, 1991: 39). As it was lighter, it allowed faster movement and was cheaper (Snodgrass, 1967: 58), so more men of the hoplite class could afford to go into battle. It could not deflect the blows that bronze armour did.

After 500 BC, more of the composite cuirasses were made from leather than linen. Because of this, the pteruges became longer and gave more protection to the groin area as a whole (Everson, 2004: 148). The leather added more protection to the shoulders and could be easily replaced. Bronze reinforcements were added too (Everson, 2004: fig. 54). Sekunda suggests that there was a similar shoulder piece/composite cuirass contained bronze sheets covered by material, however, there is no evidence that it existed before the cuirass of Philip II of Macedon (Sekunda, 2000: plate A, 51; cited by Everson, 2004: 155). This cuirass (Everson, 2004: fig. 70) had manageable 5mm thick iron plates except at the shoulders, which made it heavier, but offered better protection.

As the mobile nature of Hellenic warfare increased, it was necessary to adapt the hoplites. As such, during the 4th century, we see the absence of cuirasses and light helmets, to make the hoplites more mobile (Hanson, 1991: 64; Lazenby, 1991:76) as bronze hampered the movement (Ober, 1991: 181). If I’m being honest, the nature of hoplite warfare was strange, using equipment and battle tactics that did not suit the terrain the Greeks lived in. Lighter troops, engaging heavy hoplites managed to cause damage when they drew the hoplites off the flat ground. However, for the nature of battle they did fight, the armour they used was extremely effective at guarding against spear thrusts. When they fought against the Persians, their armour proved to be useful against the light infantry tactics they employed. How effective was ancient armour in Greece? Very effective for their type of warfare they employed, even if in unsuitable terrain.

[1] Athenian strategoi still retained the Corinthian helmet as part of their identity (Wheeler, 1991: 141).

[3] The initial introduction of the Corinthian helmet may have essentially created the phalanx, as other soldiers had to rely on others to protect what they could not see, thus staying in close formation (Everson, 2004: 80).

[4] Connolly suggests that this was due to the invasions of the Celts, who rained blows down onto Greek heads with their slashing swords (Everson, 2004: 180, citing Connolly, 1998: 80).

[5] The porpax was detachable so as to allow the hoplite to insert his fist, thus he could hol up the shield easier (Cartledge, 1977: 13).