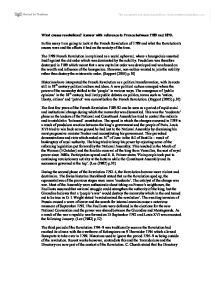 What causes revolutions? Answer with reference to France between 1789 and 1870. In this essay I am going to look at the French Revolution of 1789 and what the Revolution's causes were and the effects it had on the society of the time. The 1789 French Revolution is explained as a social upheaval, where a bourgeoisie asserted itself against the old order which was dominated by the nobility. Feudalism was therefore destroyed in 1789 which meant that a new capitalist order was developed and was based on the wealth and influence of the bourgeoisie. However, non-nobles wanted to join the nobility rather than destroy the aristocratic order. (Rapport (2005) p.10) Historians have interpreted the French Revolution as a political transformation, with its roots still in 18th century political culture and ideas. A new political culture emerged where the power of the monarchy shifted to the 'people' in various ways. The emergence of 'public opinions' in the 18th century, had lively public debates on politics, terms such as 'nation, liberty, citizen' and 'patriot' was current before the French Revolution. (Rapport (2005) p.10) The first few years of the French Revolution 1789-92 can be seen as a period of rapid social and institutional change during which the monarchy was dismantled. This was the 'moderate' phase as the leaders of the National and Constituent Assemblies tried to control the radicals and to establish a 'balanced' constitution. ...read more.

C. Church stated that the Directory had 'a board of executors for the revolutionary settlement' while 1799 rather than 1794 is now seen as the end date of the Revolution. The Directory proved to be more valuable than any other revolutionary regimes to the 'military takeover and the emergence of the cult of personality'. The success of Brumaire 1799 shows that the Directory had never before experienced the stability it had brought the Revolution. The Directory made the mistake of assuming that the parties would undermine the regime. La Revelliere Lepaux argued that it would be better 'to die with honour defending the republic and its established government than to...live in the muck of parties'. This obsession with 'faction' became the Directories downfall which left the Directory with hardly any authority. By 1799 Sieyes and Ducos had become aware of a possibility of a Jacobin revival that they asked the Bonaparte for a revision of the constitution. This resulted in the beginning of the Consulate period. (Lee (1982) p.15-17) Contemporaries see the French Revolution as an event of high importance. The Duke of Dorset wrote to the English government on 16 July 1789 and stated 'the greatest Revolution that we know anything of'. However, English and American historians do not seem to agree on this matter and believe the Revolution was not very significant. They believe that the reforms which took place at the time were anyway going to take place under the regime. (Townson (1990) ...read more.

However, most English historians treat such an interpretation of the Revolution with disdain. They continue to believe that the Revolution was an economic disaster. The most rapidly expanding sector of the French economy was overseas trades, the economy only grew slowly to the 1840s. (Townson (1990) p.127-8) The French Revolution came too early, before the French society had developed the level of communication necessary to transform the desire for realization into effective political consciousness. A great mass of people were left out from active participation in nation building for another half century. Alexis de Tocqueville warned his compatriots in the 1850s that the French Revolution had strengthened the state at the expense of society 'this new power was created by the Revolution or, rather, grew up almost automatically out of the havoc wrought by it'. The Revolution created citizens who were equal to one another but who were unable to oppose the state's power. (Gillis (1983) p.97) The Revolution had a big impact; it was more of a revolution in the mind than a revolution of reality. The revolutionary principles did revolutionise the way in which the next generation viewed politics and society. The Revolution was a political revolution with political consequences, it is therefore, not surprising that it modified the old regime rather than destroyed it. William Doyle suggested that some elements of the old regime lingered even as late as the twentieth century. (Blanning (1987) p.56) To conclude we can see that the cause of the Revolution was not a single factor but a series of events which caused the French Revolution. ...read more.