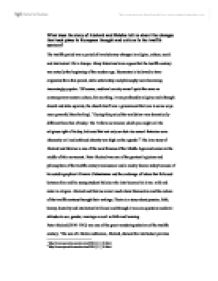 What does the story of Abelard and Heloise tell us about the changes that took place in European thought and culture in the twelfth century? The twelfth period was a period of revolutionary changes in religion, culture, social and intellectual life in Europe. Many historians have argues that the twelfth century was actually the beginning of the modern age. Humanism is believed to have originated from this period, while scholarship and philosophy were becoming increasingly popular. 'Of course, medieval society wasn't quiet the same as contemporary western culture; for one thing, it was profoundly religious and although church and state separate, the church itself was a government that was in some ways more powerful than the king'.1 During this period the worldview was dramatically different from that of today. The 'reform movement, which you might call the religious right of its day, believed that not only sex but also sexual fantasies were inherently evil and enforced chastity was high on the agenda'.2 The love story of Abelard and Heloise is one of the most famous of the Middle Ages and occurs in the middle of this movement. Peter Abelard was one of the greatest logicians and philosophers of the twelfth century renaissance and is widely known today because of his ...read more.

I humbled myself before thee the fuller grace I might obtain from thee, and so also damage less the fame of thine excellence... " '14 For Heloise 'marriage would destroy the disinterested and gratuitous character of her love. She preferred a free union, but Abelard imposed marriage upon her, probably in the hope of placating Fulbert and regaining his respectability'.15 Her attitude towards marriage reflects her individuality and shows that she indeed was unlike other women of her time, as she didn't consider marriage as part of love. However Fulbert still enraged about the loss of his family honour, sent a group of thugs to Abelard's house on night where they attacked him in his sleep and castrated him. The ' humiliation of his wound, which quickly became known throughout Europe led Abelard to renounce the world and enter a monastery'.16 At Abelard's insistence Heloise entered a nunnery where she spent the remainder of her life. Some years following their separation Abelard wrote their story in a letter to a friend, which he entitled Historia Calamitatum. Heloise somehow got a copy of this letter. She wrote to Abelard and began the correspondence that has made them famous. ...read more.

He no longer thinks of Heloise as his wife or lover but his sister in religion. However the thoughts of Heloise are quite different and she writes "Everything we did and also the times and places are stamped on my heart along with your image, so that I live through it all again with you. Even in sleep I know no respite. Sometimes my thoughts are betrayed in a movement of my body, or they break out in an unguarded word."27 She makes it clear that she is still in love with him but he responds urging her to accept God "I thought that this bitterness of heart at what was so clear an act of divine mercy had long since disappeared".28 Through their writings Abelard and Heloise leave a highly detailed account of their remarkable lives. They reveal much both about themselves and the world in which they lived. They prove themselves to be individuals who were not afraid to express their believes when through they run contrary to social norms. Theirs is a story about "love, religion and philosophy". It reveals how the religious conflict of the day had huge effects on the ideas of sex and gender. It shows how a man whose new ideas of reason and logic were condemned and reveals the tensions that existed among intellectuals because of these new ideas and new learning. ...read more.