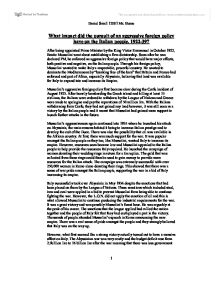 What impact did the pursuit of an aggressive foreign policy have on the Italian people, 1922-39?

What impact did the pursuit of an aggressive foreign policy have on the Italian people, 1922-39? After being appointed Prime Minister by the King Victor Emmanuel in October 1922, Benito Mussolini went about establishing a firm dictatorship. Soon after he was declared PM, he enforced an aggressive foreign policy that would have major effects, both positive and negative, on the Italian people. Through his foreign policy, Mussolini wanted to make Italy a respectable, powerful country. He wanted to dominate the Mediterranean by "breaking free of the bars" that Britain and France had enforced and part of Africa, especially Abyssinia, believing that land was available for Italy to expand into and increase its Empire. Mussolini's aggressive foreign policy first became clear during the Corfu incident of August 1923. After heavily bombarding the Greek island and killing at least 15 civilians, the Italians were ordered to withdraw by the League of Nations and Greece were made to apologise and pay the reparations of 50 million lira. With the Italians withdrawing from Corfu, they had not gained any land however, it was still seen as a victory by the Italian people and it meant that Mussolini had gained more support to launch further attacks in the future. Mussolini's aggressiveness again continued into 1935 where he launched his attack on Abyssinia, the main reasons behind it being to increase Italian prestige and to develop the cult of the Duce. There was also the possibility that oil was available in the African country. At first, there was much support for the war. It was popular amongst the Italian people as they too, like Mussolini, wanted Italy to increase its empire. ...read more.

Both were used again when the League of Nations applied sanctions on Italy. The Italian people were encouraged to work together to stay strong throughout the sanctions and after they had been lifted, many people saw Italy as being extremely powerful as they had won the war even with sanctions applied. This brought a real sense of nation pride amongst the people in Italy. As well as this, Mussolini highlighted the importance of Italy being the "new roman empire." This was done to show the people how Italy was becoming as successful as what it once was during the time of roman Italy. Propaganda and censorship were there to censor what the Italian people saw and to give them a false truth so that the real motives behind Mussolini's foreign policy could be hidden and Italy could be portrayed as a powerful and dominant nation which would lead to more mass support in Italy. With Italy becoming more involved in wars and a future world war on the cards, Mussolini believed it was important to prepare the youths of Italy for future war as they were seen as the "Fascists of the Future." Both boys and girls aged 6-21 were expected to become involved and they were trained very much like soldiers. They had to march, swear an oath to Mussolini and wear uniform. There was a real sense of them acting like an army and being untied with one another, with them becoming prepared to fight for Italy in future years to come. As well as this, Fascism also had an effect on children during their time in school. ...read more.

In conclusion, to answer the question above, you can see that Mussolini's aggressive foreign policy had a powerful effect on the Italian people. Although he strived to improve the conditions of Italy and make it a better place to live, through the welfare state, the economy was poor and there was little money available due to the high costs, especially in the Abyssinian war, which didn't really achieve anything. Large amounts of weapons had been used in the wars during Mussolini's aggressive foreign policy which left Italy unprepared for future world war. His foreign policy had a particularly dramatic effect on the Jewish people as his relationship with Hitler and determination to act like him caused Mussolini to discriminate against the Jews which before had even featured in his party. Mussolini was concerned about the future of Italy and used youth groups and Autarky to try and prepare the country for future wars. However, Autarky was impossible as oil had not even been discovered. Although he strived for nation pride through achieving glorious triumphs across the Mediterranean, breaking free of the bars, and dominating in Africa, little was achieved and it only left Italy itself facing huge costs which led to high prices and taxation which the Italian people were faced to pay. If Mussolini had focused more on trying to improve the conditions of the people within his own country, rather than focusing on conquering others, then maybe there would have been mass support for him. Instead, by focusing on increasing his empire, he forgot about improving the state of Italy and its people. Word Count:2,749 ?? ?? ?? ?? Daniel Small 12H/1 Mr. Hume 1 ...read more.

This student written piece of work is one of many that can be found in our University Degree Byzantine History section.