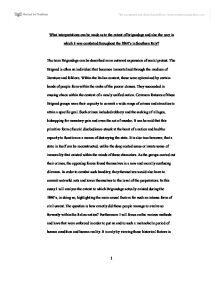 What interpretations can be made as to the extent of brigandage and also the way in which it was combated throughout the 1860s in Southern Italy?

What interpretations can be made as to the extent of brigandage and also the way in which it was combated throughout the 1860's in Southern Italy? The term Brigandage can be described as an outward expression of social protest. The Brigand is often an individual that becomes immortalized through the medium of literature and folklore. Within the Italian context, these were epitomized by certain bands of people from within the ranks of the poorer classes. They succeeded in causing chaos within the context of a newly unified nation. Common features of these Brigand groups were their capacity to commit a wide range of crimes and atrocities to attain a specific goal. Such crimes included robbery and the sacking of villages, kidnapping for monetary gain and even the act of murder. It can be said that this primitive form of social disobedience struck at the heart of a nation and had the capacity to function as a means of destroying the state. It is also true however, that a state in itself can be reconstructed, unlike the deep rooted sense or innate sense of immorality that existed within the minds of these characters. As the groups carried out their crimes, the opposing forces found themselves in a new and morally confusing dilemma. In order to combat such banditry, they themselves would also have to commit unlawful acts and lower themselves to the level of the perpetrators. In this essay I will analyze the extent to which Brigandage actually existed during the 1860's, in doing so, highlighting the main causal factors for such an intense form of civil unrest. The question is how exactly did these people manage to evolve so fervently within the Italian nation? ...read more.

One can appreciate the plight of the Brigand through his own personal perspective, however it is also essential to understand the viewpoint of the other dimension, the Italian army. Throughout the Brigand war of the 1860's it is also interesting to notice the ways in which the Italian army not only combated the problems, but the ways in which they perceived the figure of the Southern Brigand. The actions of the Brigand were often viewed as contrary to the natural law of the land and thus needed to be extinguished in the long-term interest of the unified Italian nation. The Brigand activities were a form of social uprising that manifested themselves in activities such as food and tax riots, physical attacks on public officers and also various land occupations throughout the country. With the diffusion on workers associations, incidents such as the urban bread riots or the different wage strikes became commonplace. In addition, the dissolution of protective price tariffs meant a decline in the amounts of industry that actually existed and therefore many individuals found themselves without employment. In a climate where the price of food is increasing and the possibility of employment is diminishing, the common man is more likely to resort to acts of violence that require the intervention of the armed forces. The issue was further worsened in the countryside where the peasants also faced an unfair system of taxation. It was the case that the tax weighed more heavily on the peasants than it did the owners of land and larger estates. These factors and the aforementioned reasons for Brigandage set up a direct confrontation between the Italian army and the forces they intended to suppress. ...read more.

In conclusion it can be stated that Brigandage was an obvious problem within the context of Italy throughout the 1860's. The problem did not occur suddenly as it was in fact the culmination of many years of repression and injustice within the social system. In a system that ignores the plight of the impoverished, a desire for revenge and a need to sustain oneself grows on a daily basis until it reaches the stage of violence and civil unrest. The economic hardships of the peasantry functioned simultaneously with a sense of ignorance through a lack of knowledge. The Southern community had both the practical reasoning to revert to Brigandage, and also the moral capacity to do so that has been instilled in them through years of hardship. The sheer fact that the army questioned their motives for brutally repressing Brigandage helps us to identify their cause. In order to conceptualize their battle, the army needed to forget the inequalities of life and consider only the welfare of the Italian nation as a whole. The army became a mechanic extension of the law that clearly infringed on the jurisdiction of the constitution. The literature of the time helps us to see how these soldiers were demonizing their enemies and rendering the Southern population as an alien stain upon the rest of the country. When we consider the opinions of historians and also the opinions of the active particpants against the wider backdrop of historical fact, we can then identify the levels to which Brigandage actually existed. Brigandage without a doubt has taken second place to wider issues of the period, however it is obvious that the decade of conflict in the 1860's was time of bloodshed that reveals a great deal about the character of a nation. ...read more.