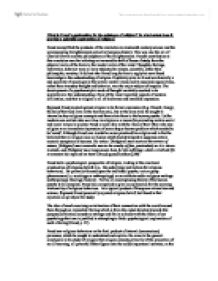 What is Freud's explanation for the existence of religion? To what extent does it provide a scientific explanation of religion? Freud exemplified the products of the revolution in nineteenth century science and the accompanying Enlightenment period in European history. This was also the era of Charles Darwin and the philosophers of the Enlightenment. Freud's contribution to this revolution was his initiating an irreversible shift of focus of study from the physical realm of the brain to the mental realm of the mind. Thoughts, feelings, motivation, behavior were all now subjected to minute, scientific, rather than philosophic, scrutiny. It did not take Freud long for him to apply his new found knowledge to the understanding of religion. Psychiatry prior to Freud was basically a sub-specialty of neurology in that severe mental illness and its assumed organic basis, rather than everyday thought and behavior, was the major subject of enquiry. The development of a psychoanalytic mode of thought inevitably resulted in its application to the understanding of one of the most important aspects of western civilization, and that is religion in all of its diverse and manifold expression. Sigmund Freud reacted against religion in its formal expression (E.g. Church, liturgy, the belief that God lives in the heavens etc.), but at the same time he sought to internalise key religious concepts and then relate them to the human psyche. Unlike modern non-realists who see value in religion as a means for promoting certain social and moral values in society, Freud is more akin with the likes of Karl Marx who saw religion as an immediate expression of some deeper human problem which needed to be 'cured'. Although Freud was Jewish he never practiced his religion and in fact he believed that all religion was an illusion which had developed to suppress certain neurotic symptoms in humans. He writes: '[Religion] must exorcise the terrors of nature, [Religion] must reconcile men to the cruelty of fate, particularly as it is shown in death, and [Religion] must compensate them for the sufferings which a civilised life in common has imposed on them' (Freud quoted by Storr p.89) ...read more.

"Another technique for fending off suffering is the employment of the displacement of libido...The task is that of shifting the instinctual aims in such a way that they cannot come against frustration from the external world" (Freud, p. 29). The assumption is that there are natural drives that propel one into action, yet that action is constrained by the needs and desires of other people (expressed in general as the artifice of civilization). For Freud, one is then only "free" over and against civilization; "The urge for freedom, therefore, is directed against particular forms and demands of civilization or against civilization altogether" (Freud, p. 50). This sets up a paradox whereby one can never be free, in that the social restrictions are integrated into the individual psyche, and perpetuated internally through repression of the instinctual drives (in the absence of any external compelling force). Freud saw the struggle against external social forces as ultimately futile, and sought instead to liberate the individual from his self-imposed double-bind. The aim of Freudian psychology is to take the energy that a patient is putting into neurotic behavior, and transfer it into a more socially acceptable venue. This change is produced by a gradual awareness on the part of the patient of the underlying causes of his or her psychological difficulties. It is assumed that we cannot change the conditions in the world which constrain our happiness, but that we can come to accept them, by-pass them, or change our attitudes towards them. In Freud's estimation, religion does not serve to liberate man from his suffering, but rather provides yet another fetter, this one self-imposed. " Religion restricts this play of choice and adaptation, since it imposes equally on everyone its own path to the acquisition of happiness and protection from suffering" (Freud, p. 36). Here religion provides another agenda, another code of behavior against which the believer must find him or herself accountable. ...read more.

Both he and Breuer knew that she had only gotten worse under Breuer's care. Over the course of six years following her treatment, Anna was committed at least three times - once by Breuer himself. It can be concluded that Freud does not have a "theory of religion " but merely a convincing dismissal of religion, cloaked in scientific objectivity. This suggests that the psychological (Freudian or otherwise) content of religious motivation and experience is an open field for inquiry. In the end Freud believed, as did Marx, that the religious instinct in people was curable (even childish), and so at some point in the future could be abandoned. This would happen once people left behind their psychological illusions and live as restored people in a world of scientifically authenticated knowledge. Yet despite this negative assessment of religion Freud's theory can open up other possibilities for explaining why humans have the religious instinct. As John Hick notes: 'If the relation of a human father to his children is, as the Judaic-Christian tradition teaches, analogous to God's relationship to humanity, it is not surprising that human beings should think of God as their heavenly Father and should come to know God through the infant's experience of utter dependence and the growing child's experience of utter dependence and the growing child's experience of being loved, cared for, and disciplined within a family.' (Hick p.35) Freud (Past Masters S.) Anthony Storr Oxford Paperbacks The Philosophy of Religion John Hick Prentice Hall Freud, S. (1912) Totem and Taboo. London:Routledge Kegan Paul. Cited in: Freud, S. (1962) Two Short Accounts of Psycho-Analysis. London:Pelican. Freud, S. (1912) Totem and Taboo. London:Routledge & Kegan Paul Freud, Future of an Illusion, SE XXI, p. 42f Freud, Future of an Illusion, SE XXI, p. 49 Freud, Discontent in Civilization, SE XXI, p. 81 Freud, SE IX, page 238 Freud: Moses and Monotheism. SE XXIII, p. 122 Freud, The Unconscious, part III, in: Freud, Sigmund, Collected Papers, London 1949, Vol IV, p. 109 ...read more.