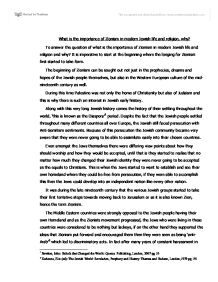 What is the importance of Zionism in modern Jewish life and religion, why

What is the importance of Zionism in modern Jewish life and religion, why? To answer the question of what is the importance of Zionism in modern Jewish life and religion and why? It is imperative to start at the beginning where the longing for Zionism first started to take form. The beginning of Zionism can be sought out not just in the prophecies, dreams and hopes of the Jewish people themselves, but also in the Western European culture of the mid-nineteenth century as well. During this time Palestine was not only the home of Christianity but also of Judaism and this is why there is such an interest in Jewish early history. Along with this very long Jewish history comes the history of their settling throughout the world, 'this is known as the Diaspora'1 period. Despite the fact that the Jewish people settled throughout many different countries all over Europe, the Jewish still faced persecution with Anti-Semitism sentiments. Because of this persecution the Jewish community became very aware that they were never going to be able to assimilate easily into their chosen countries. ...read more.

Zionism helps the Jews fill the gap that had been left due to the war and the disappearance of their religious beliefs and their rituals. Along with this is the isolation Israel faced from the rest of the world, when the Arab nations convinced the United Nations that Zionism meant racism, many Jews worried that the fall of Hitler and his regime had not seen the end of the anti-Semitic feelings. This is why the Jewish people, even today, are convinced that the only place they can be free to be Jews is in their own State of Israel, where they don't have to be afraid of stirring up any kind of alienation towards them. Zionism is not only a place where the Jewish people can have a refuge from persecution, but it is also somewhere that the Jews can reconstruct their Jewish identity not only for themselves but nationally and internationally, Zionism is not only a religious movement but also a political movement. The most well known leader on the political side of Zionism is Theodor Herzel; it was he that called all of the 'Zionist groups to attend the first Zionist congress'5 he also sought out powerful countries and petitioned them to support a Jewish homeland in Israel. ...read more.

'Jewishness.'15 It also gives the Jews a place to focus on spiritually; just as the Muslims have Mecca the Jewish people have the State of Israel. Zionism today signifies for the Jews that their 'God has not forsaken his covenant or special relationship with the people of Israel.'16It gives back to Jews all over the world a sense of pride, dignity and belonging which they had lost during the war; it is to the State of Israel that they turn when they need guidance to help them in this modern world. Zionism was and will always be important to the Jewish people because an Israel state has given the Jews a purpose, a place to focus their spirituality, where they can practise their faith and worship without fear of persecution, a sense of belonging to a place and time, their dignity and most of all a place to call home, something they had lost long ago. No matter where they live in the world they know that there is somewhere that will welcome them as Jews, somewhere they can be where they don't have to fear any 'anti-Semitic prejudice.'17 Bringing great comfort, happiness and joy something they had lost after the Holocaust. ...read more.