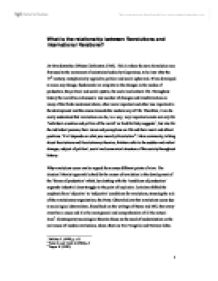 What is the relationship between Revolutions and International Relations?

What is the relationship between Revolutions and International Relations? De Revolutionibus Orbium Coelestinm (1543). This is where the term Revolution was first used to the movement of celestinian bodies by Copernicus, to be later after the 17th century, metaphorically applied to political and social upheavals. It has developed to mean any change, fundamental or complete to the changes in the modes of production, the political and social system, the social and cultural life. Throughout history the world has witnessed a vast number of changes and transformations in many of the fields mentioned above, other more important and other less important to the development and the course towards the modern way of life. Therefore, it can be easily understood that revolutions can be, in a way, very important events not only for 'individual countries and politics of the world' as Fred Halliday suggests1, but also for the individual persons, their views and perceptions on life and their moral and ethical positions. 'It all depends on what you mean by Revolution'2. More commonly, talking about Revolutions and Revolutionary theories, thinkers refer to the sudden and radical changes, subject of political, social and economical structure of the society throughout history. Why revolutions occur can be argued from many different points of view. The classical Marxist approach looked for the causes of revolution in the development of the 'forces of production' which, by clashing with the 'conditions of production' engender industrial class-struggle to the point of explosion. Leninism shifted the emphasis from 'objective' to 'subjective' conditions for revolutions, stressing the role of the revolutionary organisation, the Party. ...read more.

It can be argued that, the more contemporary the examinations of revolutions in history, the more the concept of revolution affect the international system, but also the international system's effect on the concept of revolution is witnessing respective growth. Also as the contemporary the revolution, the more 'exported' in terms of values and ideas it is. As Halliday points out, 'the American and English revolutions did little to actively promote the revolution abroad'23. By contrast, the French and the Russian revolutions that followed were in sense, committed to promote the revolutionary internationally and especially inside Europe. French revolutionaries tried to promote change abroad, and after 'October 1917, the Bolshevik leadership was convinced that was both possible and obligatory for the revolutionary regime to do all it could to promote revolution on a world scale'24. Indeed the revolutions of 1917, and in particular the October revolution of Lenin's Bolshevik, later Communist party, was exported and occurred that way, to have a significant effect on the international system. The revolution I Russia 'owed its legitimacy and even raison d' �tre to a doctrine represented the most systematic and comprehensive denial of the validity of all the basis tenets of the Westphalian structure'25. However as the revolution progressed, Armstrong points out, that was 'based on an ideology that represented itself as the antithesis of the state, and had take the concrete form of a state'26. Coalescing the above with the replacement of authority in the French revolution, that was claimed in the earlier part of this essay, a logical link is formed, leading to the mere conclusion, that revolution, depended on the size and mobilisation of rebels, is ...read more.

Due to this fact, but also the idea which was reflected in the writings of Hedley Bull, that great powers are committed to maintain international order, numerous interventions on such domestic conflicts- revolutions occur, with the USA holding the lead. Gorbachev's 'Perestroika' was the last of the revolutions of the 20th century, according to the view of revolutions and their transformations, discussed earlier in this essay. Perestroika, 'not the first nor the most radical programme of economic reform in communist countries'42 put an end to the old communist way of public administration. On its aftermath, capitalism found space to expand over communism and spread its values and ideas in a rather disputable way. From the above brief study of the broad concept of revolution, the relationship between revolutions and international relations was underpinned. Resuming the above, it has been proven that revolutions pose a clear challenge in the international system in terms of balance of power, state legitimacy, and sovereignty (which extends to the legitimacy and sovereignty of the international system), social and political structures, ideology but also foreign policy making. It was identified how classes and social movements can be transnational actors on the spread of revolutionary thoughts and practices, and how domestic revolutions, can affect the international system. Liberal Democracy has now, in the late 20th and early 21st centuries, formed a more 'stable' international system - or at least it is destined to form- and some say that revolutions now it is an improbable phenomenon in developed industrial societies. But Halliday believes that 'even for the liberal democracies we are making what is in historical terms an optimistic and reasonable, but uncertain prediction'43. I am sure that there are more to come. After all it is Human Nature. ...read more.