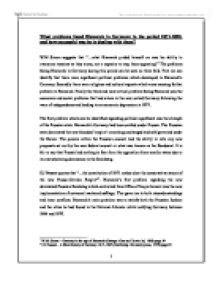 What problems faced Bismarck in Germany in the period 1871-1890, and how successful was he in dealing with them?

What problems faced Bismarck in Germany in the period 1871-1890, and how successful was he in dealing with them? W.M Simon suggests that "...what Bismarck prided himself on was his ability to overcome tensions as they arose, not a capacity to stop them appearing"1 The problems facing Bismarck in Germany during this period can be seen as three fold. First we can identify that there were significant political problems which developed in Bismarck's Germany. Secondly there were religious and cultural aspects which arose causing further problem to Bismarck. Finally the third and most critical problem facing Bismarck was the economic and social problems that had arisen in the new united Germany following the wars of independence and leading to an economic depression in 1873. The first problem which can be identified regarding political significant was the strength of the Prussian state. Bismarck's Germany had been unified under Prussia. The Prussian state dominated the new founded 'empire' remaining unchanged and self governed under the Kaiser. The powers within the Prussian council had the ability to veto any new proposals set out by the new federal council or what was known as the Bundesrat. It is fair to say that Prussia had nothing to fear from the opposition from smaller states due to its overwhelming dominance in the Reichstag. ...read more.

The CP believed that such freedoms born from the 1848 revolution would lead ultimately to freedom of thinking, creed and will lead people to commit sins. Bismarck was skeptical about the 'old catholic' ideology and was an issue raised in the Reichstag in March 1871. Bismarck began to become disillusioned with the attitude of the center party and consequently identified to the rest of the political parties in the Reichstag that they had become hostile to the state (reichsfeindlich) and a gap had opened up between them. Bismarck's main problem with them lay in a conflict of best interests regarding the German integration of a constitution. The center party wanted the bill of rights set out by the Prussian constitution incorporated into the imperial constitution. However the liberal nationals preferred to include the fundamental rights drawn up in Frankfurt in 1848, which were not as pro-catholic in origin. Simon's comments that "This was the sort of issue Bismarck feared, that might not only cement the alliance between the center and the poles but also attract some progressives to the catholic cause"5 There evidence that Bismarck was caught in two minds because he couldn't satisfy the national-liberals or the growing CP party. Bismarck's personality can be attributed to the solving of this problem in my opinion. ...read more.

Tariffs were introduced on iron and major grains to stop cheap imports effecting Germanys thriving economy. The rise of social democracy under Bismarck saw the Junkers (German landowners) become the main opposition to political reform. Bismarck's disillusionment continued and he saw the Socialists and Anarchists as his main threat in parliament. Although only two socialists were ever elected into the Reichstag, during Bismarck's reign in 1871, they were blamed for the two assassination attempts on the Kaiser and dubbed by Bismarck as "...this country's rats that should be exterminated". By the end of Bismarck's rein as chancellor in 1890 the socialist's controlled 35 seats in the Reichstag. Bismarck's strategy to destroy social democracy was the introduction of social legislation to prevent workers becoming involved with radical ideas held by the socialists. Accident and old age insurance as well as medicine were used as a tool to appease these growing feelings. However Bismarck was unsuccessful in this two way approach. He couldn't strategically win workers and conservatives with conflicting ideas and so support for social democrats increased. By the time of the 1890 election Bismarck found enemies in the form of the CP, SD and the progressives and so was inevitably doomed to fail. He resigned at sixty-five years old and fearing a bloodbath coup d' e'tat by the state a new younger emperor was announce William II. ...read more.