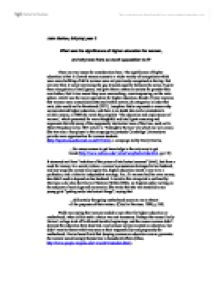 What was the significance of higher education for women

John Bolton, BA(chs) year 3 What was the significance of higher education for women, and why was there so much opposition to it? There are two issues for consideration here. The significance of higher education is that it allowed women access to a wider variety of occupations which were more befitting of skills women were not previously recognised as having. But not only that; it meant narrowing the gap towards equality between the sexes. It gave them recognition of intelligence, and gave them a status in society far grander than ever before. But it also meant they were encroaching, even trespassing, on the male sphere, which was the major opposition for higher education; Sandra Taylor explains that women were consciously contained within certain job categories in order that male jobs would not be threatened (1977). Josephine Butler expounds a reason why women desired higher education, and there is no doubt she can be considered a reliable source; in 1868 she wrote the pamphlet 'The education and employment of women', which presented far more thoughtful and intelligent reasoning and arguments that did many of the supposedly intellectual men of the time, such as Dr. Henry Maudsley in his 1874 article in 'Fortnightly Review' (to which we will come). She was also a key player in the campaign to persuade Cambridge University to provide more opportunities for women students (http:///spartacus.schoolnet.co.uk/611.htm), a campaign led by Emily Davies, ...for many women to get knowledge is the only way to get bread (http://www.indiana.edu/~letrs/vwwp/butler/edu.html, pp.7-8) It stemmed not from "ambition of the prizes of intellectual success" (ibid.), but from a need for money. ...read more.

103; cited in Kamm, 1965, p.202). The implication of this is that the campaigners were not willing to accept any half-measures or middle course. Kamm (1965) goes on to point out that Miss Beale, another pioneer of women's education, welcomed the special examination (footnote, p.202). Disappointing though the special examination was, it was the best the campaigners could expect before 1878. Holcombe (1973, p.48) provides a succinct history of women's higher education; in 1869 Emily Davies founded Girton College, Cambridge, which was the first women's college of university stature. In the same year, the university set up examinations and certificates for women over the age of eighteen (Kamm (1965, p.201) suggests the minimum age was seventeen). But it was London's university that first granted degrees to women, in 1878. Cambridge wouldn't follow suit for another sixty-nine years. Pool (1998, p.99) unwittingly offers a possible reason why; Oxford and Cambridge...turned out future prime ministers, distinguished physicians, would-be barristers, and countless numbers of aristocrats and country squires. Of course, an institution which turned out anything but what were essentially domestic servants was no place for women. Henry Sidgwick was a professor at Cambridge, and although he did want women to have higher education, he encouraged them to take the new subjects like philosophy and economics (Bicinus, 1985, p.125). In that respect they were achieving higher education, but were studying different subjects to men and were therefore not really vying for the same educational status. It was because these new subjects held less prestige that Emily Davies encouraged women to take the Greek examinations, the Tripos examination and mathematics and classics. ...read more.

Harrison cited Hegel, who said that no woman in history ever produced anything great (1995, p.292). But - Hegel was wrong. In the space of just a few years, women earned themselves a place in society, the rights of higher education, and a new respect from men for their intelligence, for which they owed credit only to themselves. This was truly something great, and it was achieved in the face of adversity no man had ever (or has ever) experienced. A crowning glory of it all was in 1887, when Agnata Ramsay or Girton College was placed first in a classics exam (Harrison, 1995, p.170). This was a flavour of the radical changes to follow. This is a particularly impressive result after the opposition of such respected publications as the British Medical Journal. We return to the issue dated April 9, 1859, which states that, "When woman undertakes, as a habit, the duty of man, then she goes beyond her province, and loses all title to our respect" (http://www.people.virginia.edu/~wwc2r/vicstudies/1859_BMJ.ladies.html) Going beyond her province or otherwise, there is no doubt about the achievements of the movement led, in part, by Emily Davies. B�darida (1991, p.122) provides very uplifting statistics; in 1881 there were twenty-five women doctors, in itself hardly a small figure given the time scale. But in 1911 there were more than four hundred, which is a phenomenal development. B�darida is less optimistic, saying, "Progress was slow...equity seemed a long way off" (1991, p.122). Eric Evans beautifully describes the result of the struggles for Higher Education for women, and on no finer note could one close, ...for a very few by 1914, the gates of medical, legal and academic professions creaked resentfully ajar" (Evans, 1997, p.273). ...read more.