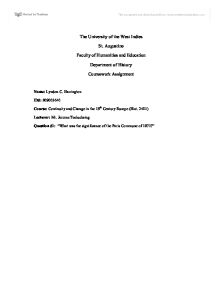 What was the significance of the Paris Commune of 1871?

The University of the West Indies St. Augustine Faculty of Humanities and Education Department of History Coursework Assignment Name: Lyndon C. Harrington ID#: 809001640 Course: Continuity and Change in the 19th Century Europe (Hist. 2401) Lecturer: Mr. Jerome Teelucksing Question #1: "What was the significance of the Paris Commune of 1871?" On March 18th, 1871, the revolutionary workers of Paris established the Commune. It was the first attempt at proletarian dictatorship; according to Kropotkine (1896) "the people of Paris rose against a despised and detested Government, and proclaimed the city independent, free, belonging to itself." The late1860s were a period of social and political ferment in Paris as well as the rest of urban France.1 In part because of an 1864 law legalizing strikes and an 1868 law liberalizing controls on the press and public meetings, but also because growing discontent with the regime of Emperor Louis Napoleon, strikes became more frequent throughout France's industrial regions and calls for social and political reforms became more vociferous. The Paris Commune only lasted 72 days, but it had a great many victims. More than 100,000 men and women were killed or exiled to the colonies when the bourgeoisie triumphed. The Commune is the great tradition of the French working class. The mute walls of P?re Lachaise2 remind the French workers of the heroism of their proletarian fathers who fought for freedom from wage slavery. ...read more.

The proclamation of the Commune on March 26th initiated a two-month experiment in democratic socialism. The Commune established worker's cooperative enterprises throughout the city, instituted universal free education, declared the separation of church and state, and passed resolutions on specific economic issues such as abolition of night work for bakers. But as Marx (1940), noted "The greatest social measure of the Commune was its own working existence, its special measures could but betoken the tendency of a government of the people by the people" (p.65). And finally, the organization of people had direct ties to Haussman's urbanization. Groups of Parisians who met freely during Liberalization became as the Communards. The Communards was a group inspired to revolt against the policies of Haussman. During the 1850s, the people living in the slums of central Paris were forced to migrate to the 18th, 19th and 20th arrondissements4, on the outskirts of Paris. As Haussmannization pierced through their neighbourhoods, they moved northwards en masse. It was in these northern suburbs that the Communards would congregate during the late 1860s. These displaced Parisians found themselves in new living areas that lacked basic amenities like public water fountains and hospitals (Edwards p.8). Their frustrations and struggles continued throughout the 1860s and were exasperated by the large-scale starvation during the Siege of Paris 1870. Although the Commune was not a class war in the sense of a proletarian revolt against capitalism, its suppression was every bit as brutal as if it has been motivated by the class hatred Marx attributed to the French bourgeoisie. ...read more.

Marx, Karl. THE CIVIL WAR IN FRANCE: THE PARIS COMMUNE [BY] KARL MARX AND V. I. LENIN. Turnhout: International Publishers, 1968. Print. Sanial, Lucien. The Paris Commune. New York: Ny Labor News Company, 1902. Print. Shafer, David. The Paris Commune: French Politics, Culture, and Society at the Crossroads of the Revolutionary Tradition and Revolutionary Socialism (European History in Perspective). New York: Palgrave Macmillan, 2005. Print. Wright, Gordon. French Historical Studies, Vol. 10, No.1 (Spring, 1977), pp. 149-172. Durham NC: Duke University Press, 1977. Print. "libcom.org." libcom.org. N.p., n.d. Web. 15 Oct. 2010. <http://libcom.org>. 1 This historical account is necessarily brief. Detailed histories in English may be found in Horne (1965) and Edwards (1971); Tombs (1981) focused on the military aspects of the uprising. The classical account in French is Lissagaray [1876] (1969); Serman (1986) provided a recent synthesis. 2 The Mur des F�d�r�s, P?re-Lachaise Cemetery where the last resisting communards were shot on May 28th 1871. 3 Emile Beaussire, a lyc?e professor who remained in Paris throughout the Commune, estimated afterward that the "artisans of disorder" had numbered no more than one hundred fifty thousand to two hundred thousand and that only about sixty thousand of these were "social revolutionaries." "Les honnetes gens sous la Commune," Revue des deux mondes, XCIV (July 1, 1871), 105-106. 4 Sub-divisions, Districts. Each arrondissement of the French capital has its own Mayor, subject, however, to the regulations and orders of the Municipal Council, which directs the general affairs of the whole city and , at the time here spoken of, was called the Commune. 5 "Bloody Week" ?? ?? ?? ?? ...read more.