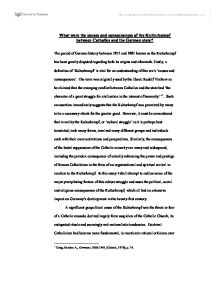 What were the causes and consequences of the Kulturkampf between Catholics and the German state?

What were the causes and consequences of the Kulturkampf between Catholics and the German state? The period of German history between 1871 and 1883 known as the Kulturkampf has been greatly disputed regarding both its origins and aftermath. Firstly, a definition of 'Kulturkampf' is vital for an understanding of this era's 'causes and consequences'. The term was originally used by the liberal Rudolf Virchow as he claimed that the emerging conflict between Catholics and the state had 'the character of a great struggle for civilisation in the interest of humanity.''1. Such an assertion immediately suggests that the Kulturkampf was perceived by many to be a necessary attack for the greater good. However, it must be remembered that in reality the Kulturkampf, or 'cultural struggle' as it is perhaps best translated, took many forms, involved many different groups and individuals each with their own motivations and perspectives. Similarly, the consequences of the brutal suppression of the Catholic minority are many and widespread, including the paradox consequence of actually enhancing the power and prestige of Roman Catholicism in the form of an organisational and spiritual revival in reaction to the Kulturkampf. In this essay I shall attempt to outline some of the major precipitating factors of this culture struggle and asses the political, social and religious consequences of the Kulturkampf, which all had an extensive impact on Germany's development in the twenty-first century. A significant geopolitical cause of the Kulturkampf was the threat or fear of a Catholic crusade, derived largely from suspicion of the Catholic Church, its antiquated rituals and seemingly anti-nationalistic tendencies. ...read more.

Some historians, such as Ellen Lovell Evans, have argued that the principal origin of the Kulturkampf lay in the individual role of Bismarck. Evans for instance highlights how all legislation against the Catholics was clearly 'urged by Bismarck'10. Bismarck was a Protestant and had what many historians have now concluded was an irrational overestimation of both the danger posed by Catholics, and the level of authority that he held over them. Bismarck saw state intervention as a pre-emptive necessity to avoid Papal domination and 'an enormous foreign conspiracy of Catholic powers that would seek to destroy the Empire'11. However, in reality neither of these threats was real enough to justify a movement such as the Kulturkampf. As the main institutor of the Kulturkampf legislation then, Bismarck's own political and religious views against the Catholics must be seen as an important cause of the Kulturkampf. Some historians have suggested that the German Kulturkampf was a part of a general anti-Catholic European trend as 'church and state came into conflict in several countries'12. David Blackbourn has argued that anticlericalism was common, as was the 'fear that revolution would break out unless political life was rigidly controlled'13. However, Ian Farr holds an opposing view by suggesting that anticlerical, let alone anti-Catholic, sentiment had 'limited extent and importance' in the second half of the nineteenth century14. It may be possible to attribute the development of the Kulturkampf to some even longer term causes, such as the German Reformation of the early sixteenth century. ...read more.

Consequences in terms of actual lasting reforms from the Kulturkampf were relatively minor, as there were few. The laws of 1874-6, which changed the education system, laws on civil marriage and the expulsion of the Jesuits, all remained, but these were the only ones. Of these, perhaps the most important consequence was the continuation of the legislation on schooling which resulted in the provision of teaching untouched by religious influence.21 However, perhaps the most poignant yet also disputed aspect to the consequences of the Kulturkampf is the accusation that the persecution of the Catholics by the state set a dangerous precedent of 'negative integration' which acted as a precondition to the Nazis and their emancipation of the Jews. The suppression of the German Catholics in what has become known as the Kulturkampf had a number of precipitating factors stretching across several years. Long term hostilities such as religious divisions from the Reformation, general anticlerical feelings in Europe and the threat of a Catholic crusade combined with short term provocations such as the rise of the Catholic Centre Party, the personal antagonisms of Bismarck and the defensive nature of the Catholic reaction to culminate in the Kulturkampf of 1871-1883. The consequential resentment and alienation of Catholics in Germany caused deep rooted social divisions, and, counter to state intentions, led to the political and spiritual strengthening of Catholicism and the hampering of German unity which the Kulturkampf had originally aimed to create. Thus it can be concluded that there were an extensive number of causes and consequences of the Kulturkampf between Catholics and the German state. ...read more.