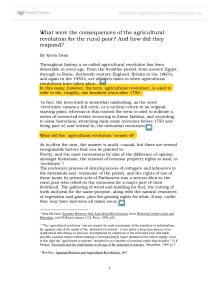 What were the consequences of the agricultural revolution for the rural poor? And how did they respond?

What were the consequences of the agricultural revolution for the rural poor? And how did they respond? By Kevin Dean Throughout history a so-called agricultural revolution has been detectable in every age. From the Neolithic period, from ancient Egypt, through to Rome, thirteenth century England, Britain in the 1860's, and again in the 1950's, are all given dates to when agricultural revolutions have taken place.1 In this essay, however, the term `agricultural revolution', is used to refer to the, roughly, one hundred years after 1750. In fact, the term itself is somewhat misleading, as the word `revolution' means a full circle, or a cyclical return to an original starting point, whereas in this context the term is used to indicate a series of connected events occurring in linear fashion, and according to some historians, stretching back some centuries before 1750 and being part of, and central to, the industrial revolution.2 What did the `agricultural revolution' consist of? As is often the case, the answer is multi -causal, but there are several recognisable factors that can be pointed to. Firstly, and the most contentious by dint of the difference of opinion amongst historians, the removal of common property rights to land, or `enclosure'.3 The enclosure process of denying access of cottagers and labourers to the farmlands and `commons' of ...read more.

While the new efficiency of farming methods meant that less man power was required to produce greater quantities of food than previously, this in turn meant that the levels of agricultural workers as had been previously required, were required no longer. A consequence of falling agricultural wages and standards of living was the increasing dependence on the demeaning system of poor relief that operated at this time.9 The poor were effectively tied to the parish, which controlled the system of relief, so were thus denied the opportunity to travel elsewhere to find work. The vagaries of the `Poor law' system contributed to making a bad situation worse for those caught up in its complexities. This along with high food prices, especially during the Napoleonic wars, as well as the widespread depression at the end of those wars, due to amongst other factors the massive demobilisation of an army that was no longer required, all contributed to the rural riots and unrest that took place especially between 1816-1831.10 So how were the rural poor to respond? Any legal or official form of redress was denied to many, if not all of the agricultural labouring class. Given that any opposition to Parliamentary acts of enclosure were to be heard in London, and that the majority of the poor never went effectively ...read more.

In common with earlier protest movements, the `swing' rioters were a movement without any recognisable leader; the very anonymity of signing threatening letters with the pseudonym `swing' was a guarantee of that. Because there was no one to point to or accuse, the very name `swing' took on an elusive, almost supernatural aspect to it, adding an air of fear and mystery to the letters, the recipients of which, could have probably attested to. Although spread across several of the Southern counties, the unrest was not part of a national movement, the whole `swing' phenomenon was strictly regional in nature and application, and as such, was not likely to have any lasting effect, not lasting much beyond 1831. Regardless of the actions of the rural poor, the `agricultural revolution' could not be undone, the new methods that utilised less manpower to produce more food than ever before could not be cast aside, nor would the mass of the populace who were not affected by them allow them to be. The changes the `revolution' brought, allowed Britain to feed and support a significant increase in its population that it would not otherwise have been able to. The fact that this was achieved with a much smaller workforce enabled the surplus to be diverted to the towns and the factories to kick-start another `revolution', but this time an industrial one. ...read more.

This essay considers the main themes relevant to the topic and is a competent answer to the question posed. The student had evidently read a range of historical sources and has a good understanding of how the topic relates to wider aspects of social and economic history. They could make better use of some of their reading. The content is also somewhat confused in places. The structure could also be improved by removing the sub-headings and adding better links between the paragraphs. 4 star.