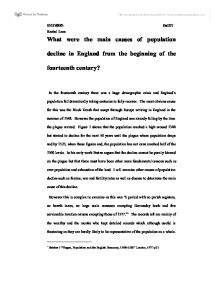 What were the main causes of population decline in England from the beginning of the fourteenth century?

What were the main causes of population decline in England from the beginning of the fourteenth century? In the fourteenth century there was a huge demographic crisis and England's population fell dramatically taking centuries to fully recover. The most obvious cause for this was the Black Death that swept through Europe arriving in England in the summer of 1348. However the population of England was already falling by the time the plague arrived. Figure 1 shows that the population reached a high around 1300 but started to decline for the next 50 years until the plague where population drops and by 1525, when these figures end, the population has not even reached half of the 1300 levels. In his early work Postan argues that the decline cannot be purely blamed on the plague but that there must have been other more fundamental reasons such as over population and exhaustion of the land. I will examine other causes of population decline such as famine, war and fertility rates as well as disease to determine the main cause of this decline. However this is complex to examine as this was "a period with no parish registers, no hearth taxes, no large scale censuses excepting Doomsday book and few serviceable taxation returns excepting those of 1377."1 The records left are mainly ...read more.

The treaty of Bretigny was signed in 1360 and despite war breaking out again in 1369 it appears to have made little impact on population levels. Rigby claims that it may have affected those parts of France brutalized by troops but the war "had little lasting impact even on the populations of the regions where it was most fiercely fought."12 Botton claims that the Hundred years war must have affected international trade but I can find no evidence that it made a serious impact on population levels. "Demographers have grappled with the problem of why- indeed if- there were such high death rates from the first waves of plague, and with the possibility that other diseases, and perhaps famines, should be taken into account when trying to explain the most difficult of all problems: namely, why the population did not recover and replace itself in the later fourteenth and through most of the fifteenth century."13 This was the most intriguing part of the population decline, previously the peasantry would replace their fallen numbers after an epidemic although not after a famine. Logically swelling the numbers after a famine would cause hardship through even more lack of food. After a disease however there was no reason not to have more children and the better standards of living they would have ...read more.

In Scarborough there were between 30- 68 births a year and on average 30 deaths. However in 1438 there were 161 deaths in total totally overtaking the birth rate. I think it must be taken in to account that the population may have kept breeding at a reasonable level but the death rates were so enormous they couldn't compete and particularly as they hit hard at the young population it meant later the fertility rates were bound to fall as less people were left. However the evidence for less and later marriages means that probably both were a contributing factor. Poos's detailed study of Essex between 1350 and 1525 did discover "a phase of somewhat higher mortality and lower fertility than the century and a half that followed"20 which confirms that fertility rates did actually drop. It is fairly simple to see that the main causes of the population decline in this period were the Black Death, famine and changing attitudes to nuptials and fertility. However the lack of direct evidence makes it very difficult to assess the contribution each one made to the problem. Increased migration complicates the issue as it is difficult to see how many men left heirs if their children have left the village and choose not inherit. It is important to remember that although the Black Death had an astounding impact on the population there were other causes for the crisis. ...read more.

This essay argues the case well, using well-placed historical evidence to support the arguments. The student has made a good effort to understand the material and present a persuasive case. It could be improved by greater consideration of the interactions between demographic factors, and also by including more of the historiography.