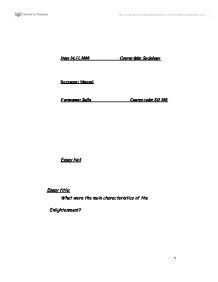 What were the main characteristics of the Enlightenment?

Date 24.11.2000 Course title: Sociology Surname: Manesi Forename: Sofia Course code: SO 300 Essay No1 Essay title: What were the main characteristics of the Enlightenment? This essay is going to discuss the main characteristics of the most important event that took place during the 18th century, Enlightenment (1715 - 1799). However, before my analysis of its main characteristics begins, it would be helpful making a small review of how things were in society before the start of this movement. Until the 18th century, just before the Enlightenment era started, people's knowledge was really limited. The only information they had about world nature and society, human creation and about people's place, duties and destiny in the world, was from what the Christian Church was popularising through the Bible and many other religious scripts. The Bible and the several religious scripts were transmitted in religious institutes, colleges, schools, and churches. Obviously, the Christendom in combination to the monarchs was the ruler of the epoch. People strictly leant on tradition, and had total faith in religion. The clergy had managed to make them believe that there was no way of improvement and that they should blindly trust the Church. Consequently, commonalty could not understand the ideas and the expectations for any different in the future. ...read more.

They paid more attention in many different kinds of individual necessities like power, happiness, pleasure and security where each one of these requirements were creating different societies depending on individual's choices. A representative supporter of individualism is Jean Jacques Rousseau. He fought the contract theorists who supported the notion that individuals were the consequence of society. Rousseau on the other hand supported the idea that the basic elements of human nature were rather the product of society. John Stuart Lock also supported this idea, as he believed in the freedom of the human being and in its right to live, to have personal freedom and have its own property. Progress Enlightenment was mainly an idea of progress, which means those fields of nature and society that concerned people could become better by the use of science and reason. That way, the world would be forever in a continuous increasing level of happiness and well being. Many theorists tried to explain the deeper meaning of progress; they therefore divided it in two parts, that of reason and of science. Kant, in his book "Critique of Pure Reason" explained how he understood reason; he viewed it as both the subject and the object of the Critique. He also expressed some questions such as, "what are the conditions of our knowledge through which modern natural science is possible?" ...read more.

Through every legacy, change has both negative and positive results, winners and losers, as it also disposes of as well as creates problems. In the case of the Enlightenment the winners were the 3rd Estate who gained power and the losers were the Nobility and the Clergy whose power was dissolved. As far as the problems were concerned it threw away many problems as prejudice and inactivity was replaced by scientific research and rationalism. However, modernity brought new responsibilities and fresh challenges and it was not known if people would be able to deal with these new responsibilities or if they were going to reap the benefits by using their power in the right way. It is obvious in the above essay that Enlightenment made an important try to bring equality to the whole community, by challenging the power that was collected in the hands of the minority. People found it difficult to accept progress and the idea of change was really frightening for them. In contrast to nowadays, were people take progress for granted and at the same time people have started losing their ultimate values. Modernity is just a movement, which will slowly end to its starting point. 'Our civilisation destines us to realise more clearly these struggles again after our eyes have been blinded for thousand years - blinded by the allegedly or presumably orientation towards the grandiose moral favour of Christian ethics. ...read more.