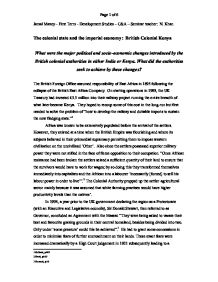 What were the major political and socio-economic changes introduced by the British colonial authorities in Kenya. What did the authorities seek to achieve by these changes?

The colonial state and the imperial economy:  British Colonial Kenya

What were the major political and socio-economic changes introduced by the British colonial authorities in either India or Kenya. What did the authorities seek to achieve by these changes?

The British Foreign Office assumed responsibility of East Africa in 1895 following the collapse of the British East Africa Company.  On starting operations in 1988, the UK Treasury had invested £5.5 million into their railway project running the entire breadth of what later became Kenya.  They hoped to recoup some of this cost in the long-run but first needed to solve the problem of “how to develop the railway and dutiable imports to sustain the new fledging state.”[1]

Africa was known to be extensively populated before the arrival of the settlers.  However, they existed at a time when the British Empire was flourishing and where its subjects believed in their primordial supremacy permitting them to impose western civilisation on the uncivilised ‘Other’.  Also since the settlers possessed superior military power they were not stifled in the face of fierce opposition to their occupation. “Once African resistance had been broken the settlers seized a sufficient quantity of their land to ensure that the survivors would have to work for wages; by so doing this they transformed themselves immediately into capitalists and the African into a labourer ‘incessantly [forced] to sell his labour power in order to live’”.[2] The Colonial Authority propped up the settler agricultural sector mainly because it was assumed that white farming practises would have higher productivity levels than the natives’.

In 1904, a year prior to the UK government declaring the region as a Protectorate (with an Executive and Legislative councils), Sir Donald Stewart, then referred to as Governor, concluded an Agreement with the Massai. “They were being asked to vacate their best and favourite grazing grounds in their central homeland, besides being divided into two. Only under ‘some pressure’ could this be achieved”.[3]  He had to grant some concessions in order to minimise fears of further encroachment on their lands. These exact fears were increased dramatically by a High Court judgement in 1921 subsequently leading to a Legislative Council declaration that “the effect of the Crown Lands Ordinance of 1915 and of the annexation of Kenya as a Colony in 1920 had been to end traditional native land rights, as in the Kikuyu githaka system, and to make the natives tenants at will of the Crown on the land actually occupied.”[4]

Previously, when “drought and pestilence brought famine; survival was achieved through intensified exchange, raiding, and the acceptance in more fortunate economies of neighbours made destitute through dearth.”[5] The British Colonial Authority on their arrival adopted a humanitarian guise in the form of supporting the natives during times of hardships, as for instance with “the ecological crisis of the 1890s, when cattle plagues, smallpox and drought wiped out up to a quarter of the human population of some areas in central Kenya and set the survivors squabbling over the means of subsistence.”[6] This resulted in the natives, especially ones from the devastated areas of Kenya, perceiving the British as patrons not conquerors and expecting a wealth of further benefits from collaboration if mutual trust could be maintained.

In addition to the Colonial Authority perhaps seeing their assistance as them setting a very ‘British’ example on how to react in a civilised manner in times of crisis, they were hoping that such reliance on them would lead the natives to adopt their ways of living.  To include satisfying financial constraints imposed by the British Treasury, “it was essential that spasmodic displays of force be converted into the steady exercise of civil power; that coercion be replaced by consent.38”[7] In line with achieving this, a uniformed police service was established to replace their need to contract African military [mercenaries] and appointed local chiefs and district administrators (initially taken from the African military auxiliaries and then later from “among individuals or lineages which had already come to the fore as accumulators of wealth and power.”[8] This helped engender a feeling of coexistence between the natives and their white ‘counterparts’.  In reality, it was only when the “Labour government’s policy of replacing local native councils with British-style local government –was translated into legislation in Kenya in the 1950 African District Councils Ordinance”[9] that this feeling became closely tied to reality.

In order to begin the process of ‘articulation’ of the economy to the capitalist global market, which the UK Government Exchequer would undoubtedly reap benefits from, creating a taxable base of marketed production was important for raising revenue. The introduction of the Hut Tax led to a change from a climate of ‘co-existence’ to one of British control. Submission to the Colonial Authority in the form of paying such a tax not only led to being the “single largest component of the Protectorate’s domestic revenue” (rising from 4.5% on its inception in 1901-02 to 29% in 1904-05) but “an outward and visible sign that the [African population] had definitely accepted Government control.”[10]  The Colonial Authority effectively betrayed the natives’ trust as they developed their administrative systems as instruments of control and exploitation.  Nonetheless, not only did increased taxation (i.e. introduction of the Poll Tax) and import duties equate to approximately 60% of total government revenue by 1910[11] but domestic market was far stronger.

A reformatory for juvenile delinquents, Kabete, which was home to an average of 185 between 1926 and 1930 offenders, “came to symbolize the commitment of the colonial state to the maintenance of social control despite its relative unimportance in the broader picture of law and order in Kenya.”[12] There was no sign of rethinking policy on the treatment of juvenile offenders from the centre’s formation in 1909 through to the early 1930s, except that is, the switch from farm labour to the teaching of a trade. Such “enactment of more liberal legislation that was in tune with modern British social policy”[13] and is indicative of some changes made on the social and legal front from this period onwards.

From the 1900s onwards, Kenya’s two pastoralisms, albeit divided by race, political geography and mode of production were both interdependent and interlocking. “Disease straddled the divide, a threat to both, but perceived and dealt with differently by each”[14] - subsistence pastoralists felt they neither needed nor wanted veterinary intervention. There were demands for compulsory measures – fencing, dipping, immunization and the removal of squatters. At first, government intervention was seen to control Africans and their herds, but the state claimed it created and implemented policy impartially. However, a government-sponsored ECF [East Coast Fever] eradication scheme adopted by settler associations in March 1910 proposed “the removal of all African stock from settler farms and spelled out the details of branding, patrolling and inspection that would control African stock within the fenced areas” [15]   Such government decisions signified a major shift in the level of state involvement.

The research of soil chemist, V.A. Beckley, contests a key aspect of colonial agricultural policy, namely the planting of crops in pure stands. As early as 1930, he compared soil conditions in African reserves to European farms where stands of singly cropped cereals were the norm. With regards to one Kenyan tribal reserve, he considered that, “The methods of agriculture…often are adversely criticized. More often than not, the methods employed are more suited to the conditions than those suggested”.[16]  When there was added impetus behind the ‘save the soil campaign’ during the war years, officials, incapable of rallying support for the use of unpaid forced labour, ”drew on the idiom of collective responsibility, ‘tribal custom’, to mobilise the human resources on which success depended.”[17]

The Colonial Authority wished to decrease expenditure from investment in the local economy and at the same time create a surplus for export.  Having already joined “overseas markets through Indian merchant capital…”[18], the administration needed to articulate the economy to capitalist agents throughout the global market if it were to make headway towards achieving these goals. From 1901 onwards, liberalising the purchase of land and deregulating its terms of use as well as maintaining a low-level of military operations meant a rapid increase in private investment in land, labour and manufacturing capital from both big firms and small players. This is reflective in the explosion in the value of land which shot up 4,000% (between 1908 and 1914), due especially to new market players “proving the investment potential of new crops and appropriate forms of animal husbandry”.[19]

Even though many land owners now possessed the collateral to secure a mortgage loan, “these unrealistically high land values forced up capital costs and concentrated the settler mind on the reduction of labour costs.”[20]  As well as simply maintaining the subordinate status of the natives, the settlers “…required access to cheap labour in order to maintain their standards of living.”[21]  The settlers reverted to letting thousands of acres of unexploited land under speculative ownership under various forms of tenancy.  Predictably, their methods to coerce a labour supply created an extreme state of “friction between their needs for accumulation and the state’s concern for social order”. [22]  It is widely believed, that the “displacement of Africans from the land was at the root of an unemployment problem that would dog the post-independence government,”[23] and the background behind this problem is still relevant in shaping the direction of policy in Kenya today.

In conclusion, the British Colonial Authority liberalising issues of land, purchase and ownership, acted as a spur to private investment and export production. Their introduction of various types of taxation on native and settler activities meant that the state’s administrative operations could be self-financed. Finally, empowering the natives with legal authority at local government level initially helped with the forced re-allocation of labour around the economy and later helped facilitate the debate on the development of the legal system via the African members of the Legislative Council.  Of utmost importance to the Colonial Authorities, however, was maintaining an effective authority over the African population whilst providing the conditions for settler capitalism through these changes.

Beinart, W., Coping with the Contradictions: The Development of the colonial state in Kenya, 1895-1914

Brett, E. A., Colonialism and Undevelopment in East Africa: The Politics of Economic Change 1919-1939