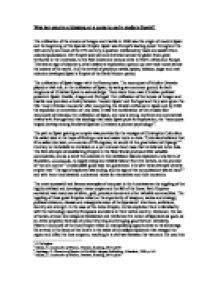 What were the major problems facing the eighteenth-century French Monarchy?

Was her empire a blessing or a curse to early modern Spain? The unification of the crowns of Aragon and Castile in 1469 was the origin of modern Spain and the beginning of the Spanish Empire. Spain was Europe's leading power throughout the 16th century and most of the 17th century; a position reinforced by trade and wealth from colonial possessions. Her Empire was vast and stretched across the globe: from great territories in the Americas, to the East Indies and various cities in North Africa and Europe. This was an age of discovery, when seaborne exploration opened-up new trade routes across the oceans of the world. And the arrival of precious metals, spices, tobacco, sugar and new colonies developed Spain's Empire of the Early Modern period. The unification of Spain began with the Reconquista. The reconquest of Muslim Granada played a vital role, in the unification of Spain, by acting as a common ground for both kingdoms of Christian Spain to acknowledge. There were three main Christian political powers in Spain: Castile, Aragon and Portugal. The unification of the houses of Aragon and Castile now provided a rivalry between 'modern Spain' and Portugal and they were given the title 'most Christian monarchs' after conquering the Muslim influence in Spain and by 1492 the expulsion or conversion of any Jews. It was the combination of the crusade like reconquest of Granada, the unification of Spain, and now a strong maritime and commercial rivalry with Portugal and this ideology that made Spain push for exploration; the "reconquest helped develop among Medieval Spanish Christians a pioneer psychology"1. ...read more.

It was the centralised nature of both Empires made the transition of Spanish integration more compatible as the polity of aborigines echoed that of the encomienda system. Even though, the exploits of the conquistadors had won a huge world empire that stretched from the bottom of southern America to California and Florida in the north. They had done so as private adventures in the form of militia. The sudden influx of foreign policy and military demands in Europe allowed the conquistadors to freely roam America. Control of the conquistadors and the Empire had to be obtained; the dilemma would be solved by implementing a formal Crown bureaucracy throughout Spain's Empire. Therefore, procuring the future of the Spanish empire and maximising the profits of the Empire. The administration of the new world dictated that the king and royal power would control the movements of the Empire. Viceroyalties would control over the territories and royal courts were set up for administrative and judicial functions; significantly the judges of the audiencias (royal courts) were sent from Spain. The basic aim of bureaucracy in the Spanish Empire was to prevent "the development of a recharged form of feudalism"5. Even though, the encomiendas of the time proved a useful, indeed essential, phase of government when transitioning. Charles V recognized: that all subjects of the crown could not be enslaved, could own property and should abide by and be protected by Spanish law. ...read more.

Similarly, new markets opened for the trade of newly discovered tobacco and coffee. However, the influx of silver in Europe proved detrimental to their economic markets. Precious metals from newly discovered deposits in America, were shipped by Spain to China and then on to Europe. Silver was less prevalent in China than in Europe and consequently more valuable. The flow of silver from the new world caused a continuous flow of wealth from China to Spain and caused general price inflation throughout Europe. The economic success of the time seems to be limited by the competition and lack of technology of the time. The world in the early modern period was still being discovered and the sparse nature of dominant colonies left Spain in a vulnerable economic situation. Fundamentally, the growth and decline of The Spanish Empire was signalled by a multitude of reasons. Spain was fortunate in the manner in which her Empire was acquired and how it was acquired, with no real input from the crown. But ultimately the pace at which Spain developed her Empire was too rapid. The monopoly of exploration that Spain experienced overwhelmed her, and therefore she began to neglect necessary components of her empire, as domestic policy took precedence. However, her Empire was not a curse but through the process of maintaining an empire the argument that "a unified Spain did not build this empire but rather that building the empire created a more unified Spain"8 becomes relevant and defines Spain's Empire as a blessing. ...read more.