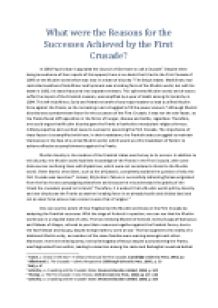 What were the Reasons for the Successes Achieved by the First Crusade?

﻿What were the Reasons for the Successes Achieved by the First Crusade? In 1092 Pope Urban II appealed the Council of Clermont to call a Crusade.[1] Despite there being an existence of four reports of this appeal, there is no doubt that it led to the First Crusade of 1095 on the Muslim world which was now in a state of disunity.[2] The Seljuk leader, Malik Shah, had controlled swathes of Asia Minor and Syria and was a binding force of the Muslim world, but with his death in 1092, his lands fractured into separate emirates. This splintered Muslim world, which was to suffer the impact of the Frankish invasion, was amplified by a year of death among its hierarchy in 1094. This left Asia Minor, Syria and Palestine bereft of any major leaders to lead a unified Muslim force against the Franks, as the remaining rulers struggled to fill the power vacuum.[3] Although Muslim disunity was a predominant factor for the successes of the First Crusade, it was not the sole factor, as the Franks faced stiff opposition in the forms of hunger, disease and battle, regardless. Therefore, one could argue that Muslim disunity gave the Franks a foothold to manipulate religious fervour, military expertise and a united cause to succeed in executing the First Crusade. ...read more.

The fact that they were aided by the Byzantines suggests that part of their success in the crusade was due to the aid of their Greek counterparts. When they crossed over to Muslim lands Emperor Alexius II even provided them with the Byzantine generals, Manuel Boutoumites and Tatikios, whose knowledge of the lands were important in the eventual capture of the city in 1097.[12] Therefore, one can see how the Frankish battlefield tactics and the fact they had consistently outnumbered their enemies had helped them to overcome Muslim armies and to accomplish the success of the First Crusade. Religious fervour was also important in Frankish military successes. One can see that with the siege of Antioch the winter saw starvation on a massive scale, yet despite this, the Franks had captured and held the city.[13] This resilience, which religious fervour had created, was emphasised with the discovery of Holy Lance, through the holy visions of Peter Bartholomew.[14] Regardless of whether or not the lance and visions were real, It gave the Franks the religious fervour to sally forth and fight Kerbogha, resulting in a Frankish triumph. Moreover, with the death of the Papal legate, Adhemar of Le Puy in 1098, the binding force, between the crusading leaders, whose concerns involved ...read more.

Coupled with the ineffectiveness of the Franks? battlefield tactics, survival of the Franks was placed under tremendous pressure, indicating that these factors were needed in the survival of the Frankish states. Overall, one can see how it was Muslim disunity which the Franks exploited in order to gain success in the First Crusade. With Muslim politics in disarray, The Franks were able to take advantage of secondary factors in the form of religious fervour, a united front of initially 60,000 and unorthodox and successful battle tactics to overcome hunger, disease and Muslim warlords of the area. However, when faced with a united Muslim world characterised by the reigns of Nur ed-Din and Saladin, one can see that the Franks suffered greatly. Indeed, there is a breakdown of the secondary causes of the success of the First Crusade demonstrated with the loss of religious fervour and unity and the adaption of the Muslim world to the Frankish battle tactics. This theory is emphasised when the fragmentation of the Muslim world caused by Saladin?s death in 1193, allowed the German Crusade to successfully take Beirut and Sidon in 1197.[20] Hence, Frankish success was epitomised through Muslim disunity in the First Crusade, but not only that, it became a theme throughout the crusading period in Outremer. ...read more.