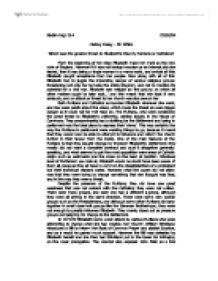 Which was the greater threat to Elizabeth's Church, Puritans or Catholics?

Nadim Haji 13.4 22/02/04 History Essay - Mr White Which was the greater threat to Elizabeth's Church, Puritans or Catholics? From the beginning of her reign Elizabeth made her mark as the new ruler of England. However if it was not foreign invasion or an internal plot she feared, then it was being a single woman in a mans world, and amidst all this Elizabeth sought acceptance from her people. Now along with all of this Elizabeth had to juggle the impending danger of various religious groups threatening not only her but also the entire kingdom, and not to mention its potential for a civil war. Elizabeth saw religion as 'the ground on which all other matters ought to take root...' and this meant that she took it very seriously, and an attack or threat to her church was also one on her. Both Puritans and Catholics surrounded Elizabeth wherever she went, and few were public about the views, which made the threat an even bigger danger as it could not be met head on. The Puritans, who were considered the great threat to Elizabeth's uniformity, existed largely in the House of Commons. They predominantly had a disliking for the Settlement and being in parliament was the ideal place to express their 'views'. This was certainly the way the Puritans in parliament were wanting things to go, because it meant that they would now be able to attempt to influence and reform the church further in their favour from the inside. ...read more.

What then proceeded was a direct assault on Elizabeth in the form of pamphlets, a pamphlet warfare began between the Elizabethan Church and those for Presbyterianism. For a time the Elizabethan Church was on the defensive as it was the Presbyterians posing the threat. The situation infuriated Elizabeth, moreover because those who were against her were now trying to convert others and it was situations like this that had the potential for civil unrest had they gained much momentum. One of the reasons I believe Puritanism was so appealing and popular was because of its patriotic allure, simple because it opposed the papacy and Roman Catholicism. Upon Elizabeth's accent to the English throne, she inadvertently brought back Puritans from exile. They saw her as their saviour, and they saw the time as an opportunity to reconstruct the Protestant church and the hope of once again converting the mass of Catholics. They too acted as a pressure group, especially as they viewed Elizabeth's changes as reminiscent of the Catholic mass and not the Prayer Book. It is difficult to assess just how widespread and strong the Puritan movement was; we do not know for certain that the lay patronage played a part in protecting Presbyterian, but we know that they were anti Whitgift as opposed to pro Presbyterian, and there was also large scale anti Whitgift action in both parliaments. Catholics in England posed a greater force to be reckoned with, not to mention historians estimates that 50-70% of the population was still Catholic. ...read more.

In conclusion both Catholics and Puritans posed great threats to Elizabeth's Church, but they both had very different angles, perspectives and prospects. The Puritans were the in the minority, and they felt hard done by Elizabeth's settlement, but they should have felt lucky knowing that most of the country was still Catholic. Attempting to up against the queen and the majority of the nation was not the best idea. The Puritans didn't even have central ideals, because they each wanted different things, with some being to radical and some not at all. They were too divided; instead they made themselves a less menacing force simply by being so indifferent about what they wanted. The Puritans ended up with a large number of different groups, some more influential than others, but none of them large enough to achieve any real goals to change the Settlement and Elizabeth's Church to a more Protestant direction. The Catholics being long established, and England being surrounded by Catholic countries surely posed a bigger threat to Elizabeth's Church; there was always a threat of invasion from a foreign power, and it eventually did come in the form of the Armada and resulted in the country uniting together. There was also the Pope whispering down people's necks to get Elizabeth to convert back, and there were the large numbers of priests who were secretly performing Catholic ceremonies and there was not much that could be done because Elizabeth knew that outside the major towns Catholicism was still the dominating force no matter what she instated in her Church. ...read more.