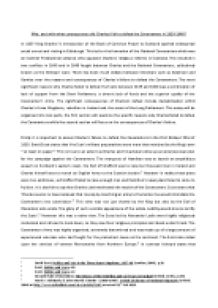 Why, and with what consequences did Charles I fail to defeat the Covenanters in 1639-1640?

﻿Why, and with what consequences did Charles I fail to defeat the Covenanters in 1639-1640? In 1637 King Charles I's introduction of the Book of Common Prayer to Scotland sparked widespread social unrest and rioting in Edinburgh. This led to the formation of the National Covenanters which was an Scottish Presbyterian alliance who opposed Charles's religious reforms in Scotland. This resulted in two conflicts in 1649 and in 1640 fought between Charles and the National Covenanters, collectively known as the Bishops' wars. There has been much debate between historians such as Adamson and Gentles over the reasons and consequences of Charles's failure to defeat the Covenanters. The most significant reasons why Charles failed to defeat the Scots between 1639 and 1640 was a combination of lack of support from the Short Parliament, a chronic lack of funds and the superior quality of the Covenanters' Army. The significant consequences of Charles's defeat include destabilisation within Charles's three Kingdoms, rebellion in Ireland and the onset of the Long Parliament. This essay will be organised into two parts, the first section will examine the specific reasons why Charles failed to defeat the Covenanters while the second section will focus on the consequences of Charles's failure. ...read more.

This left Charles with no fresh funds for the campaign against the Covenanters and led to what Kishlansky and Morrill have described as 'the single great miscalculation of his career. He decided to invade Scotland without the necessary money'.[13] Again like the First Bishops' War in 1639, the King's Army was crippled by lack of funds. The King's troops were under trained, impoverished and lacked the same level of motivation when compared to the army put together by Leslie.[14] This can clearly be linked back to the 1639 conflict. In addition the leaders of the English Army did not inspire confidence. Gentles states that 'Strafford was a novice, Northumberland was ill; Conway was indecisive and showed poor judgement in his choice of ground'.[15] In contrast Leslie was an efficient and effective leader. The Covenanters invaded Northern England and defeated the English Army at the Battle of Newburn in August 1640, which allowed the Scots to seize control of Newcastle. This forced the King to sign the Treaty of Ripon in October 1640 which left Newcastle in control of the Covenanters. This was another humiliation for Charles and a clear victory again for the Covenanters. Overall it is clear to see that the most significant reason why Charles failed to defeat the Covenanters in the Second Bishops' War was a lack of support from ...read more.

While the army put together by the Covenanters was highly religiously motivated, included many experienced veterans and an all around stronger force than the one mustered by Charles. These three main factors of lack of support from Parliament, a chronic lack of funds and the superior strength of the Covenanters' Army combined and interlinked to give the Covenanters victory over Charles in the Bishops' Wars of 1639 and 1640. The three most significant consequences of Charles's defeat was firstly the destabilisation it caused which stretched beyond Scotland's borders and was the beginning of the Wars of Three Kingdoms. Charles's failure was a significant factor in the timing of the Irish rebellion in 1641. The Bishops' War left the English preoccupied and Charles's resources fully stretched which gave the Gaelic Irish the opportunity to rebel. A further significant consequence of Charles's defeat was the exhaustion of his finances which forced the King to recall the Long Parliament which raised many new problems for Charles such as the impeachment and execution of Strafford. The onset of the Long Parliament while did not make Civil War inevitable it was still a clear stepping stone towards Civil War in 1642. Finally the third significant consequence of Charles's failure to defeat the Covenanters was it allowed the Covenanters to support Parliament during the English Civil War which gave Parliament a significant advantage over Charles and led to Charles's surrender to the Covenanters in 1647. ...read more.