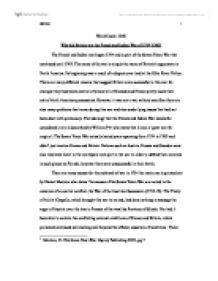 Word Count: 2260 Why did Britain win the French and Indian War of 1754-1760? The French and Indian war began 1754 and is part of the Seven Years War that continued until 1763. The name of the war is simply the name of Britain's opponents in North America. Its beginning was a result of a dispute over land at the Ohio River Valley. There are many different reasons that suggest Britain were successful in this war for example they had taken control of almost all of Canada and France pretty much their entire North American possessions. However it was not a war without sacrifice there are also many problems that arose during this war and also under lying issues that had not been dealt with previously. The ideology that the French and Indian War should be considered a win is described by William Pitt who states that is was a 'great war for empire'. The Seven Years War actually lasted years spanning from 1754 to 1763 and didn't just involve France and Britain. Nations such as Austria, Prussia and Sweden were also involved. Later in the war Spain took part in the war in order to defend their colonies in such places as Florida; however they were unsuccessful in their battle. ...read more.

This is where is believed Pitt boasted of his fine achievement by claiming he had 'won Canada on the banks of the Rhine. The reason Frederick took such a subsidy is explained in Daniel Marston's book The Seven Years War, in which he states that Frederick II could recognise 'the formidable possibility of an Anglo-Austrian-Russian alliance against him, made overtures to the British government in May 1955, indicating he had no designs on Hanover and wished for peace.'6. A notion which offers a problem for the British in the French and Indian war is the advantage the French had at the start of the war due to their Native American allies. The Native Americans had far superior geographical understanding of the battle field in this period and this led to early defeats as George Washington was defeated at Fort Necessity. This was because the military led by Washington was no match for the French 'troupe de la marine' and General Edward Braddock was killed in Battle of the Wilderness for the British. In this battle the British clearly outnumbered the French but still managed to lose this battle. This turned out to be an important turning point in the War, because the British needed to review their tactics because at this time they were struggling to achieve anything. ...read more.

term Marston describes this as Britain's successes were short lived because 'the war's cost were to have a more lasting impact than its victories. The army had performed well, but many lessons learned were quickly forgotten, as was apparent when the British army went to war with America in 1775'12 In conclusion it is clear that Britain were the Victors in the French and Indian War. However this victory came at a dear cost and that was the American Revolution which occurred just twelve years later and meant that Britain and its colonies did not have time to recover on a military and economical front. There was however some benefits for example the tactics employed by William Pitt meant that it was only called the Seven Year War rather than the Thirty or even Hundred year wars of yesteryear. The key reasons for the victory along with the tactics employed by Pitt were that they had a very strong financial backing from the British Government that meant that they out-matched their opponents by sheer numbers. According to most books researched the French and Indian war that led to the Seven Year war was overly expensive war that the land of Canada could have covered the cost of in the long term but the financial strains brought on by the war proved detrimental in their long term goals. ...read more.