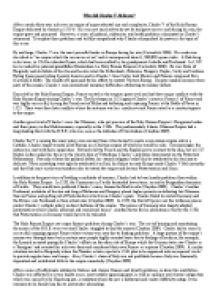 Why did Charles V Abdicate?

ï»¿Why did Charles V Abdicate? After a nearly forty year rule over an empire of unprecedented size and complexity, Charles V of the Holy Roman Empire abdicated his throne in 1555-6. His rein saw much adversity yet he had great success and during his rein, the empire grew and prospered. However, a series of political, militaristic and health problems culminated in Charles’s retirement. To explore these problems and to fully comprehend why Charles relinquished his power is the topic of this essay. By and large, Charles V was the most powerful leader in Europe during his rein (Cavendish 2006). His realm was described as “an empire which the sun never set on” and it encompassed about 1,500,000 square miles. A Habsburg in his teens, in 1516 he inherited Spain, which had been unified by his grandparents Isabella and Ferdinand. In 1519 he succeeded his paternal grandfather Maximilian I as Holy Roman Emperor (Cavendish 2006). He was Duke of Burgundy and Archduke of Austria and he also ruled the Netherlands, Bohemia, Hungary, Naples, Sicily and Sardinia. Ruling Spain meant ruling Spanish America and in Charles’s time Cortés took Mexico and Pizarro conquered Peru (Cavendish 2006). The wealth of Spain paid for his efforts to control Western Europe. ...read more.

whilst the German states saw Charles as a ?foreigner? and resented his rule over them and considered their own Princes as supreme (Claydon 2009). A similar situation existed in Burgundy where the Flanders estates rejected a 1534 plan to be organised into an imperial 'circle? to provide regular taxes and troops. Also, Charles?s claim of Italy was not profitable because Italy was financially dependant and contributed little to the empire monetarily (Claydon 2009). After a series of unfortunate militaristic failures and chronic finance and loyalty problems, in about his mid-forties, Charles was afflicted by severe health issues, most notably agonising gout, as well as epilepsy and chronic indigestion which was caused by his Hapsburg jaw, a condition where the jaw is deformed and creates difficulty eating. It was common to his family line due to aristocratic inbreeding. Tests have been conducted on a finger of Charles?s (which was preserved separately from his body) by researchers at the University of Barcelona who have concluded that severe gout was the main cause of Charles?s abdication (Emery 2006). They concluded that anyone with a condition that severe could not work. Historically, gout is seen as a ailment of the very wealthy due to food that increase risk are red meat. ...read more.

Charles was occasionally visited by notable people, including his illegitimate son Don Juan de Austria, as well as his heir Philip II of Spain. Like many former men of power in history, Charles was deeply interested in politics and was routinely posted on the news of the empire in his retirement. Probably hoping for news that his successors had created a miraculous Christian unification of Europe! He lived his few remaining months on earth amid works of art, of which he had a keen appreciation (Titian was his favourite painter), amid the books which, as a cultured man, he studied and took pleasure in enjoying the music (Knight 2009). His health afflictions worsened and he died of malaria on September 21, 1558 (de Zulueta 2007, 107-9). He was buried in the monastery church, though his remains were transferred twenty-six years later to San Lorenzo del Escorial. Cavendish, R. (2006, January). ?Charles V?s Spanish Abdication?. Retrieved April 7, 2010, from History Today: www.historytoday.com/MainArticle.aspx?m=31395&amid=30227842 Claydon, A. (2009). ?Charles V?. (Professor A. Claydon lecture 9/12/09) LR4, Bangor. Emery, G. (2006, August 3). ?Gout Forced Charles V Abdication, Study Finds?. Retrieved March 31, 2010, from Free Republic: http://www.freerepublic.com/focus/news/1677324/posts Knight, K. (2009). ?Emperor Charles V?. Retrieved April 5, 2010, from The Catholic Encyclopaedia: www.newadvent.org/cathen/03625a.htm de Zulueta, J. (2007). ?The cause of death of Emperor Charles V? in Parassitologia [Spanish medical journal] vol. 49 ...read more.