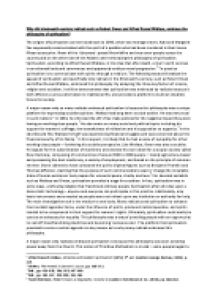 Why did nineteenth-century radicals such as Robert Owen and Alfred Russel Wallace, embrace the philosophy of spiritualism?

Transfer-Encoding: chunked ﻿Why did nineteenth-century radicals such as Robert Owen and Alfred Russel Wallace, embrace the philosophy of spiritualism? The origins of Spiritualism can be traced back to 1848, when two teenage sisters, Kate and Margaret Fox supposedly communicated with the spirit of a peddler who had been murdered in their house fifteen years prior. News of this ?discovery? spread like wildfire and very soon people across the country and on the other side of the Atlantic were embracing the philosophy of spiritualism. Spiritualism, according to Alfred Russell Wallace, is the idea that after death, a man?s spirit survives in an ethereal body and commences and apparently endless moral progression. [1] To practice spiritualism is to communicate with spirits through a medium. The following essay will analyse the appeal of spiritualism and specifically why radicals in the Nineteenth-century; such as Robert Owen and Alfred Russel Wallace, embraced this philosophy. By analysing the three key factors of science, religion and socialism, it will be demonstrated that spiritualism was embraced by radicals because it both offered a curious alternative to traditional life, and provided a platform to build an idealistic future for society. A major reason why so many radicals embraced spiritualism is because this philosophy was a unique platform for expressing socialist opinions. Wallace had long been a social activist. He was very vocal in such matters ? in 1881, he criticised the UK?s free trade policies for the negative impact they were having on working-class people.[2] He also ...read more.

One could engage in spiritualist inspiration from their own homes. As Slotten explains, spiritualism appealed to many educated Victorians who no longer found the traditional religious doctrine acceptable, yet were unsatisfied with the increasingly materialistic and mechanical views emerging from Nineteenth-century science.[6] This idea of taking power away from the Church was reinforced by the on-going Industrial Revolution. As a result of industrialisation, there was increasing urbanisation and more goods were available for consumption. Before, much of the freedom of people was restricted ? either by the Church or the government, but now people could express themselves. The rise of spiritualism emphasised effects of Industrialisation and convinced many people that the Church is not a do-or-die form of authority. As the power of the Church declined, the power of science began to rise. In 1774, German doctor Franz Anton Mesmer began conducting experiments to discover if humans can be treated via the use of mechanical manipulation. In his work titled Planetarium Influxu, Mesmer argued the existence of animal magnetism, claiming that the movement of planets influences the conduction of invisible fluids. He claimed that health is influenced through bodily tides, and health and personality move in correspondence with various astrological influences. This scientific theory of mesmerism caught the eyes of many. The new and emerging bourgeois class in Paris was fascinated by Mesmer?s actions and this provided him with a new market. ...read more.

As well as the fundamentals of spiritualism being attractive to many, a key reason why so many radicals embraced spiritualism is because of the flourishing printing press. For many radicals who were already disillusioned by the Church, enticed by science, and driven by socialism; mass media reports of spiritualism acted as the final-step in the embracing of spiritualism. News of the Fox sisters? ?discovery? spread fast thanks to the new and improving communication technologies such as the mass media and the printing press. Additionally, popular literature (circulating rapidly during the Enlightenment era) often depicted ghost stories and hauntings, drawing in popular audiences. The Yorkshire Spiritualist Telegraph, Britain?s first supernatural newspaper, and other similar institutions appealed to masses. With the media and printing press constantly circulating information and stories on spiritualism ? it is inevitable that some radicals, and general people, would have been fascinated by this philosophy which was gaining mass coverage. ________________ [1] Alfred Russell Wallace, Miracles and Modern Spiritualism [1874] 3rd. ed. (London: George Redway, 1896), p. 115. [2] Slotten, The Heretic in Darwin?s Court, pp. 365-372. [3] Ibid., pp. 436-438, 366, 453, 487-488. [4] Ibid., pp. 265-267, 299-300, 361-364. [5] Frank Podmore, Robert Owen, a biography: Volume 2 (London: Hutchinson & Co., 1906), pp. 604-614. [6] Ross A. Slotten, The Heretic in Darwin?s Court: The Life of Alfred Russell Wallace (New York: Columbia University Press, 2004), p. 4. [a]This needs to be footnoted somehow [b]I can talk about the Scientific Revolution if words are needed [c]An historian from the Reformation parts and a piece of evidence for scientific developments during the Enlightenment ...read more.