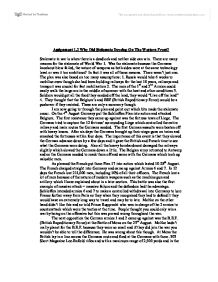 Why Did Stalemate Develop On The Western Front?

Assignment 1.2 Why Did Stalemate Develop On The Western Front? Stalemate in war is when there is a deadlock and neither side can win. There are many reasons for the stalemate of World War 1. Was the stalemate because the Germans knockout blow failed, the nature of weapons as both sides were at the same technology level or was it too ambitious? In fact it was all of these reasons. There wasn't just one. The plan was also based on too many assumptions: 1. Russia would take 6 weeks to mobilise even though she had been building railways for the last 10 years, railways and transport was crucial for fast mobilisation 2. The men of the 1st and 2nd Armies could easily walk the large arc in the middle of summer with the heat and other conditions 3. Soldiers would get all the food they needed off the land, they would "Live off the land" 4. They thought that the Belgium's and BEF (British Expeditionary Force) would be a pushover if they resisted. These are only a summary though. I am now going to through the plan and point out which bits made the stalemate occur. On the 4th August Germany put the Schlieffen Plan into action and attacked Belgium. The first resistance they came up against was the fortress town of Liege. ...read more.

He was wrong about this though. At Mons the British lay in a line across the Germans route and fired at the Germans with there .303 Short Magazine Lee-Enfield rifles and with a maximum range of 2,500 yards and in the hands of a well trained soldier he could fire 15 aimed shots with it in a minute. At first the Germans thought they were under machine gun attack but they pushed the British back. The British were treating it as a holding operation. At this battle the B.E.F. suffered 1600 casualties while the Germans suffered 5000 which showed that a well trained army even though it was small was still effective. The B.E.F. retreated to Le Cateau were they performed another holding operation against the Germans. The aim of these was to slow the Germans down which they did. Plus slowing down was a factor of the stalemate. Also at this time Moltke's health began to breakdown because of the failing plan and this affected his judgement. He was not a good commander. He didn't go to the fronts to check the situation himself he just let the 5 commanders do there job. Even then there weren't enough wireless transmitters and receivers to keep in touch with all the armies effectively. It also didn't help that his Headquarters were so far back from the front. ...read more.

Modern artillery was also very powerful. The invention of the recoilless gun and the rifling of the barrel made the guns more accurate, quick firing and gave them a greater range. There were two types of gun: the howitzer and the field gun. The difference between them is that the field gun fired roughly level and straight at the troops and so didn't have a great range and needed to be nearer the front. While on the other hand the howitzer fired at an angled trajectory and so had a longer range and could hit trenches and blockhouses. These guns could fire many types of shells including gas shells, shrapnel shells and high explosive shells. Shrapnel shells exploded above the advancing troops and usually used against attackers on the surface while High Explosive shells were used against trenches because they blasted earth away. The Royal Artillery's guns included the 18-pounder field gun, with a range of 6,525 yards and a 4.5-inch howitzer, with a range of 7,300 yards. They also had a 60-pounder heavy gun, with a range of 12,300 yards. Both countries had even bigger guns than these but they were usually siege howitzers and were usually mounted on railway carts. The Germans for example used these against Liege and these guns bore were 17 inches in diameter. Another new weapon if you could call it one was barbed wire. The troops were not used to this and it was very troublesome to get through while under fire. ...read more.

The author clearly has a very detailed knowledge of the early stages of the war on the Western Front and of the key weapons that were used. However, not all of this information is useful in explaining why the trenches developed; the essay would be greatly improved if the author had linked back to the question more. 3 out of 5 stars.