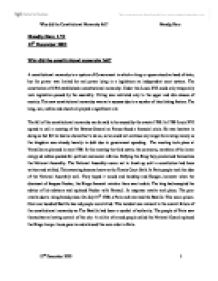 Why did the constitutional monarchy fail?

Mandip Hare LVI 12th December 2003 Why did the constitutional monarchy fail? A constitutional monarchy is a system of Government in which a king or queen stood as head of state, but his power was limited by real power lying in a legislature an independent court system. The constitution of 1791 established a constitutional monarchy. Under this Louis XVI could only temporally veto legislation passed by the assembly. Voting was restricted only to the upper and idle classes of society. This new constitutional monarchy was not a success due to a number of interlinking factors. The king, war, nobles and church all played a significant role. The fall of the constitutional monarchy can be said to be caused by the events 1789. In 1788 Louis XVI agreed to call a meeting of the Estates-General as France faced a financial crisis. He was hesitant in doing so but felt he had no choice but to do so, as he could not continue any longer borrowing money as the kingdom was already heavily in debt due to government spending. The meeting took place at Versailles as planned in may 1789. ...read more.

From the very beginning he was hesitant in calling an Estates General meeting. Could the Constitutional monarchy every have worked with a reluctant monarch? The church was also another reason that the constitutional monarchy fell. The Civil Constitution Of The Clergy was issued in February 1790, this document transformed priests into paid agents of the state. Revolutionary France asserted it's right over Rome to appoint its own Bishops and priests. This action angered Pope Pius VI who called the revolution Godless. The ancien regime church had many privileges and owned most of the land, which was exempt from taxes. In 1790 monasteries and convents were closed. All members of the clergy had to take oath that ensured they would be loyal to the king. 109 clergy members agreed to the revolution, two out of 44 bishops agreed. The pope encouraged people to disagree with the revolution. This resulted to the Massacre of refractory priests. In this all those who disagreed were killed. The revolution became known as one with a protestant plot. In places across the country, violence broke out between supporters of the revolution and defenders of the church. ...read more.

The failure was inevitable form the beginning due to the king's reluctance. 1789 showed that the idea of royal absolutism was replaced by the idea of enlightenment and natural sovereignty. This was shown in the titles of French kings. The king could be sacked at any given time. The revolution was republican from the beginning. It was logic that the king would go. The third approach is the empirical approach. It is the approach taken by British historians based on documented evidence. They say it was not inevitable as there was no sign of republicanism in 1789. They also base their view upon evidence. Once Louis gave his absolute powers he became very popular and was trusted. Marie Antoinette on the other hand was not. To conclude it is clear that a number of factors some inevitable and others not as much so played a part in the failure of the constitutional monarchy. I believe the failure was inevitable as Louis was reluctant. It would have possible for a constitutional monarchy to succeed if the Monarch was unwilling himself to make I succeed. Louis, although his meanings were good, simply did not have the character to adapt to the reforms taking place. Why did the Constitutional Monarchy fail? Mandip Hare 1 12th December 2003 ...read more.