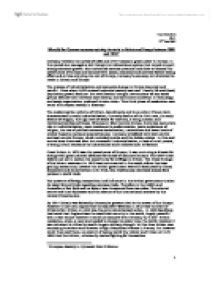 Why did the German economy out strip its rivals in Britain and Europe between 1880 and 1914?

Tom Crawford His 1 27th Oct 2003 Why did the German economy out strip its rivals in Britain and Europe between 1880 and 1914? Germany between the period of 1880 and 1914 became a great power in Europe. In this period she managed a well thought out educational system that helped support strong economic growth. She harboured extreme potential and drive to become the powerhouse of Europe and coupled with social, economic and political factors taking effect and at time crippling the rest of Europe, Germany's economy out stretched its rivals in Britain and Europe The process of Industrialisation and economic change in Europe was slow and painful. From about 1870 onward industrial society matured. Family life stabilised; population growth declines. But stabilisation brought new tensions as key social groups defined their interests more clearly, and continued innovation in technology and social organisation produced its own strain. This third phase of moderation saw much of European society in disarray.1 The modernisation patterns of Britain, Scandinavia and to an extent France were characterised by early industrialisation, the early decline of the birth rate, the early decline of religion, the high level of desire for mobility, a rising income, and restrained political extremes. Whereas in West Central Europe, there was more state role in industrialisation, more resistance to modernisation, more persistence of religion, the rise of political extremes (socialisation, nationalism and lower levels of protest based on personal acquisitiveness. Germany straddled both west central and east central Europe, which included Austria and the Balkan states. ...read more.

Germany on the other hand had a comparatively advanced educational system that held children at the age of 14 in compulsory education while England's workforce seemed to be largely trained on the job. The reformation of the British public school supplies the reason for what Wiener calls "The Decline of the Industrial Spirit". If the case is proven that lack of education does not have any bearing in Britain` s economic stature, what, if anything, is the cause of a generation of poor entrepreneurs, and what would be it` s effect, if any, on the economy as a whole? It could be argued that the after 1870 the economy of the "first industrial nation" began to decelerate, comparing her with her closet rivals. This 'deceleration' can be put down to a number of factors as laid out in Derek Aldcoft's article , "The entrepreneur and the British Econamy , 1870- 1914" published in 1964 , spear headed the broad indictment of the British entrenpeur... 4 "A/ They failed to adopt the best available techniques of production in many industries, ranging from ring-spinning and automatic weaving in cotton to the mechanical cutter and electrification of mines in coal. B/ They underestimated the growing importance of science, investing little in laboratories and technical personnel for research or for the effective exploitation of foreign research. C/ They over-invested in the old staple export industries such as cotton and iron, and were slow to move to the industries of the future such as chemicals, automobiles, and electrical engineering. ...read more.

The government could finance such a spending because of the reparations paid by France, am mounting to a total of five million Gold Francs, paid in rates since 1871. The German economy benefited along side the economies of Europe, in her strong period of growth in 1871-1874 when she was hit by the recession of 1873. The economy then began to pickup with the boom excelling in 1888. This period is internationally referred to as the 'second industrial revolution' or Gruenderzeit (Founders era 1870-1900), where many Germany's larger enterprises were founded in this period, including Werner von Siemens, Hoesch and Thyssen. Germany at this time exercised a mixed economy policy with a combination of interference and non-interference . Protective tariffs were raised from imports in order to protect the domestic steel industry and Agriculture. The successful new currency the Reich mark , which was based on the gold standard, was being used in opposition to the hitherto practiced gold and silver standard and was seen as a model for stability in Europe. Therefore in conclusion I believe that the main reasons for the German economy out striping her rivals between 1880 and 1914 are a superior education system, well organised world trading, and the down sizing of her rivals. With Britain's gradual dislocation from her thrown as the leading country in the world caused by a mix of social upheaval, reluctance and disability to properly fund and manage business ventures coupled with Russia's sluggish progression into the industrial era and France's slow revolutionary traditions, Germany managed to excel economically. ...read more.