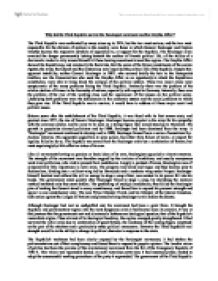 Why did the Third Republic survive the Boulangist movement and the Dreyfus Affair?

Why did the Third Republic survive the Boulangist movement and the Dreyfus Affair? The Third Republic was confronted by many crises up to 1914, but the two most serious, and the two most responsible for the division of opinion in the country, were those in which General Boulanger and Captain Dreyfus became the respective symbols of opposition to, or support for the Republic. The Boulanger crisis revealed the danger permanently lurking beneath the surface of French political life, of the ability of a charismatic leader to rally around himself all those bearing resentment toward the regime. The Dreyfus Affair showed the Republicans, and eventually the Socialists, that the union of the former constituents of the ancien regime; the army, the Church and the aristocracy, now imperiled the political life of the Republic. Despite this apparent instability, neither General Boulanger in 1887, who seemed briefly the heir to the Bonapartist tradition, nor the Conservatives who used the Dreyfus Affair as an opportunity to attack the Republican constitution, were able to bring about the collapse of the political system. These two major crises were symptomatic of the many problems facing the Third Republic. Externally there was the problem of the relative decline of France in the hierarchy of nations, especially with regard to Germany. Internally, there was the problem of the rise of the working class and the appearance of the masses on the political scene. Underlying both problems were the deficiencies in the economic system and the social problems to which they gave rise. If the Third Republic was to survive, it would have to address all these major social and political issues. ...read more.

The Dreyfus Affair would mark the main stage in this reversal of party positions with regards to national unity, and the army would thus present the Republic with its second great challenge. The pre-conditions for the Affair were laid down in 1891, when Germany extended the Triple Alliance to include Austria-Hungary and Italy; it was an alliance which seemed particularly hostile to France. In addition, the insoluble problem of Alsace-Lorraine excluded any possibility of rapprochement with Germany. It was therefore inevitable that in such a period of insecurity and doubt, the position of the French army would attract a great deal of public attention. The nation needed to know if the army was loyal to the Republic, if it was becoming the embodiment of certain religious opinion and if it represented an independent power within the state. Was the army the saviour of the nation or the destroyer of democratic principles? It was against this background of self consciousness that the Dreyfus affair assumed such crucial importance. The case of Alfred Dreyfus, a Jewish officer on the general staff wrongly accused of spying, became a major political affair which divided French society into two bands of passionate partisans. Those who believed him to be innocent declared that the military authorities, who had accused and judged him, had stopped at nothing to conceal their duplicity and incompetence. They had, as the Dreyfusards pointed out, forged and suppressed evidence and conspired to prevent justice in the interest of what appeared to be an anti-Semitic, anti-Republican officer corps. To the opponents of Dreyfus, the army seemed the defender of the security and greatness of France, and as such, the military as an institution was above criticism. ...read more.

The most successful politicians of the Third Republic were those who manipulated the parliamentary machine in such a way as to further the interests of the rural areas and quiet country towns. It was for this reason that throughout the two major crises, the regime was never seriously in danger. While those on the right called for strong government, they were not able to overthrow a system which seemed to satisfy the desire of Frenchmen to be free of Government interference. In fact few Frenchmen wanted a strong government as most were content with verbal criticism, while supporting economic policies which did not touch their pockets. The Dreyfus Affair marked the beginning of a period of government in which the Radical Socialist party introduced measures of mild social reform, while not interfering with the economic interests of their electors. The power of moderate opinion in the French provinces was also built into the constitution, and it is perhaps a measure of the satisfaction felt with the system of the Third Republic, that demands for further reform of the Senate after 1882 were slow to come and never very important. Neither the Boulangists nor the anti-Dreyfusards were thus able to overcome the vested interests which the Third Republic had created for itself. The crisis of 1914 was to reveal the underlying national unity of France, as patriotism overcame all doubts on the right about democracy, and all doubts of the left about bourgeois society. The Dreyfus Affair and Boulanger crisis had revealed just how deep and widespread the support for the Republican constitution was, and it would not be until the 1930's that the system was once again seriously challenged. ...read more.