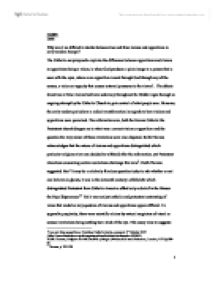 Why was it so difficult to decide between true and false visions and apparitions in early modern Europe?

344885 2600 Why was it so difficult to decide between true and false visions and apparitions in early modern Europe? The Catholic encyclopaedia explains the difference between apparitions and visions as apparitions being a vision, is when God produces a plain image to a person that is seen with the eyes, where as an apparition is sent through God through any of the senses, a vision or sagacity that causes external pressures to the viewer1. The debate about true or false visions had been underway throughout the Middle Ages through an ongoing attempt by the Catholic Church to gain control of what people saw. However, the early modern period saw a radical transformation in regards to how visions and apparitions were perceived. The reformation saw, both the Roman Catholic the Protestant church disagree as to what was a correct vision or apparition and the question the very nature of these revelations were also disputed. Keith Thomas acknowledges that the nature of visions and apparitions distinguished which particular religious view one decided to withhold after the reformation, yet Protestant alterations concerning certain revelations challenge this view2. Keith Thomas suggested that "it may be a relatively frivolous question today to ask whether or not one believes in ghosts, it was in the sixteenth century a shibboleth which distinguished Protestant from Catholic almost as effectively as belief in the Massor the Papal Supremacy."3 Yet it was not just catholic and protestant contrasting of views that made he very question of visions and apparitions appear difficult. ...read more.

at their face value.12" Indeed, as there were also other explanations regarding the validity of apparitions being thrown around, Protestants claimed that apparitions may certainly be real, but false in perception. Lavater explained that ghosts did not derive from spirits of the dead, but could be explained as "either a good or evill angell, or someother forth warning sent by God.13" Lavater goes on to give details "it is no difficult matter for the devil to appeare in diuers shapes, not only of those which are alive but also of deade men...and in the forme of beats and birds and...also to bring incredible things to pass�."14 As we have seen, the view that the devil could initiate himself into a vision or an apparition was one that had been around for many years. Yet Protestants, through propaganda writings raised their confessional attack by explaining that those without proper religious order were most susceptible to be played by the devil. This type of discourse is most apparent in the work of Jean Wier in his work Cinq Livres de l'Imposture et Tromperie des Diables: Des Enchantements et Sorcelleries(1569). In his writing, Wier also points to other reasons that led to difficulty in deciding between true and false apparitions. For example he suggests that not only "those who mistrust the Lord" are prone to devil dissolutions but also "the malicious, those who are curious about illicit things, those who are poorly instructed in the Christian religion, the envious, the malfaiteurs, the elderly who have almost lost their mental faculties, and all manner of women.15" The debate then ...read more.

Its fist appearance was in 1659 and throughout the eighteenth century it was being used as an instrument to present magic manifestoes, set in a dark room projecting spectres usually in the form of ghosts or the devil. In 1798, Belgian showman Etienne Gaspard Robertson, presented the magic lantern together with special effects at a show called the Phantasmagoria. At first it was reported that the optical illusions scared watchers so much that some were reported to have run out of the show screaming.24 The magic lantern shows are just another example of anxieties that people in early modern Europe were faced with. No longer was it just religious issues that made a premonition suspicious, but human science had also pushed itself into the equation. During the Middle Ages, society was not advanced enough but to look to the church for explanations regarding the questions of visions and apparitions. With the reformation and the breaking away of the conventional church arguments began as to what qualifies to actually be classed as reality. This then paved the way for atheists and sceptics to state their view on what they thought was possible. All this added to much confusion and in the case of visions and apparitions, there were so many explanations flying around it was understandably difficult to decide between what was real and what was false. On top of this, the advances in technology assured that even more confusion was to be added to the matter as with equipment such as the magic lantern, showmen were playing with peoples fears and casting devils and spirits from the ground-the very things that had led to the publics confusion n the first place. ...read more.