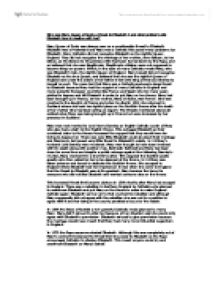 Why was Mary Queen of Scots a threat to Elizabeth I and what problems did Elizabeth face in dealing with her?

Why was Mary Queen of Scots a threat to Elizabeth I and what problems did Elizabeth face in dealing with her? Mary Queen of Scots was always seen as a considerable threat to Elizabeth. Elizabeth was a Protestant and Mary was a Catholic this posed many problems for Elizabeth. Many Catholics did not recognise Elizabeth as the rightful Queen England. They did not recognise the marriage of her mother, Anne Boleyn, to her father, as his divorce to his previous wife had been turned down by the Pope, and so believed that she was illegitimate. Illegitimate children were not supposed to become kings or queens. Which, in the eyes of many Catholics made Mary, who was Elizabeth's heir, the rightful Queen of England. Mary herself did not recognise Elizabeth as the true Queen, and believed that she was the rightful Queen of England and under the orders of her father in law (the king of France) referred to herself as such. The mere fact that Mary was a Catholic produced a large threat to Elizabeth because Mary had the support of many Catholics in ...read more.

It was when she came to England that the threat to Elizabeth was at its greatest. Mary became the focus for everyone who did not like Elizabeth and wanted someone else on the throne. This increased threat first became obvious in 1569 shortly after Mary had escaped to England. There was a rebellion in Northern England by Catholics who planned to overthrow Elizabeth and put Mary on the throne in order to make England Catholic again. Elizabeth sent an army that crushed the rebellion and although Mary supposedly did not agree with the rebellion she was not in a position to agree with it and her being in the county provided a focus for the rebels. In 1569 the Duke of Norfolk a rich powerful Catholic made planned to marry Mary. Mary didn't refuse his offer but because of her situation said she would only agree with Elizabeth's permission. Elizabeth refused to give permission because the marriage would have meant that Mary had many more influential supporters in England. ...read more.

Mary resented being kept a captive in England, and longed to be restored to the Scottish throne. Elizabeth's councillors urged her to have the Scottish Queen executed, but Elizabeth resisted them. It was not until the Babington plot of 1586 that she finally saw that she must execute Mary before Mary had her killed. There was also proof of Mary's involvement which under the bond of association meant that she was guilty of treason Elizabeth was hurt and angry that Mary had personally endorsed her murder, when for almost twenty years, she had protected Mary's life. Mary was put on trial, she was found guilty of treason, and condemned to death.. In conclusion Mary's biggest threat to Elizabeth was that she was her Catholic heir. It was common for heirs to the throne to overthrow the present ruler but this threat would not have been as great if Mary hadn't been Catholic. Her Catholicism made her an alternative ruler to Elizabeth and provided her with influential support in her plans to depose the queen. Elizabeth faced many problems due to the threat that Mary posed against her but overcame them all maintaining her position and her power. ...read more.