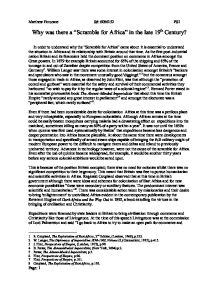 Why was there a "Scramble for Africa" in the late 19th Century? In order to understand why the "Scramble for Africa" came about it is essential to understand the situation in Africa and its relationship with Britain around that time. As the first post-industrial nation Britain and its financiers held the dominant position on commerce in Africa amongst the Great powers. In 1879 for example Britain accounted for 65% of the shipping and 85% of the tonnage in and out of Zanzibar despite competition from the United States of America, France and Germany1. William Langer saw there was some interest in colonisation amongst Britain's "bankers and speculators who saw in the movement unusually good 'diggings'."2 but the consensus amongst those engaged in trade in Africa, as observed by John Flint, was that although the "protection of consul and gunboat" were essential for the safety and survival of their commercial activities they harboured "no wish to pay for it by the regular taxes of a colonial regime"3. Bernard Porter stated in his somewhat provocative book The Absent-Minded Imperialists that about this time the British Empire "rarely aroused any great interest in parliament"4 and amongst the electorate was a "peripheral fact, which rarely surfaced"5. ...read more.

This can certainly be seen as the spark that ignited the scramble as it was the first definitive challenge to what had otherwise been British commercial domination in Africa, but on what basis? The immediate economic implications of French colonisation on free trade prove Wilhelm Mommsen's diagnosis of Imperialism as a "purely political conception" and a "phenomenon of power politics"12 to be overstated and this is ratified by the necessity for the Berlin Congress of 1885. The General Act of the Berlin Congress 1885 specified that "The trade of all nations shall enjoy complete freedom - In all regions forming the basin of the Congo and its outlets"13, an implication that imperial nations had been adopting mercantile policies abroad to benefit the economy of their home nation, as was feared by the British. Mommsen notes in Theories of Imperialism that both the Liberals that drove capitalism and the Marxists that opposed it recognised that the possibilities for growth were limited and it was therefore important to extend the system to virgin territories14. This was most certainly applicable to Britain at the time, as is observed by Thomas August that whilst the British export industries remained substantial until the outbreak of World War I, economic growth was disappointing relative to that of other industrial nations15. ...read more.

The change in objective notable in British colonial policy is evident of the position Britain held in Africa and how that changed towards the end of the 19th century. Whilst Britain maintained dominance of commerce in Africa there was little state interference and when Africa raised enough attention in the House of Commons action was taken on humanitarian and scientific grounds, often with the laying of infrastructure beneficial to Africans and to those bringing civilisation through commerce and Christianity. Once this position was contested by other European nations there was a marked shift towards mercantilism, the possession of territory becoming a necessity to protect trade from rival nations. Whilst advances in technology and medicine were undoubtedly prerequisites to possessive expansion in Africa they were always either incidental, as was the case with quinine, or came about when the demand for these advancements arose. It was this demand that initiated the development of the armed steam-boat just as it was this demand that began the "Scramble" for Africa. States justified this expansion on a variety of grounds, but the foremost cause of the scramble was the pursuit for national prestige. Whilst humanitarian, scientific and technological advancements continued on an individual basis, only these powerful European states wielded the power to subjugate African territories and when the balance of power in Europe appeared so conclusive after a century of warfare, Africa became the new field on which to compete. ...read more.