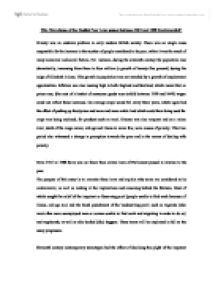 Why Were Some of the English Poor Laws passed between 1531 and 1598 Controversial?

Why Were Some of the English Poor Laws passed between 1531 and 1598 Controversial? Poverty was an endemic problem in early modern British society. There was no single cause responsible for the increase in the number of people considered to be poor, rather it was the result of many economic and social factors. For instance, during the sixteenth century the population rose dramatically, increasing from three to four million (a growth of twenty five percent) during the reign of Elizabeth I alone. This growth in population was not matched by a growth of employment opportunities. Inflation was also running high in both England and Scotland, which meant that as prices rose, (the cost of a basket of consumer goods rose sixfold between 1500 and 1640) wages could not reflect these increases. On average crops would fail every three years, which again had the effect of pushing up food prices and more and more arable land which could have being used for crops was being enclosed, for products such as wool. Disease was also rampant and on a micro level, death of the wage earner, old age and illness to name few, were causes of poverty. This time period also witnessed a change in perception towards the poor and in the means of dealing with poverty. From 1531 to 1598 there was no fewer than eleven Acts of Parliament passed in relation to the poor. ...read more.

Prices roses."5 As large numbers of poor had the effect of alarming the authorities and were considered a danger, the Act implemented by the House of Commons in 1547 was extremely harsh and possibly the most controversial of all the sixteenth century poor laws. It was as follows: An Act for the Punishment of Vagabonds and for the Relief of the Poor and Impotent Persons 1. Possible enslavement of sturdy beggars for two years; for life if they run away; offenders to be branded on the chest with a 'V'; 2. Cottages to be erected for the disabled and relief given to them; 3. Weekly collections in the parish church after exhortation by a preacher.6 As can be seen, the statute followed the principles of providing for the 'deserving poor' and brutally harsh punishment of the 'undeserving poor'. Although it contained clauses concerning the employment of poor children and collections for the impotent, (which were extended further in 1552) the treatment of able bodied poor deemed to be vagrants was highly controversial and extremely brutal. For instance anybody, (man or woman) who found themselves to be unemployed for three consecutive days or more and who lacked means of support, would come to find themselves classed as a vagrant, which would the lead to them being branded on the chest with a 'V', then enslaved for a period of two years. ...read more.