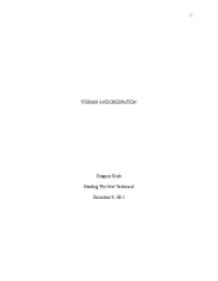 Woman and Ordination. In this paper we will look at three women and their views on ordination of women

﻿WOMAN AND ORDINATION Gregory Keels Reading The New Testament December 9, 2012 Woman and ordination is one of the most talked about things in the church. There are so many books, articles, sermons, and personal opinions on this subject. In this paper we will look at three women and their views on ordination of women. Along with their views we will also look at the issues they see surrounding ordination. Each woman will be divided into questions so that we can get a better understanding of their views. The questions we will look at with each Woman are: 1) What is the main question to be answered or issue to be resolved according to each scholar? Is the question or problem at hand presented with clarity and relevance? 2) What arguments are advanced by each author in the course of her discussion? Provide clear evidence and evaluate the merit of their positions fairly. 3) To what sources of authority does each author appeal (e.g. Scripture, experience, science, tradition, etc.) and to what degree? Provide clear evidence. 4) What assumptions are being made by each author in the course of the discussion (even in the way the argument is framed)? Does a point of view contain contradictions, is it based on misleading analogies and metaphors, or is there merit to the position presented? Give examples from the article. 5) How fully is the scriptural evidence treated (both in support and refutation of the argument presented)? ...read more.

The main question that is to be answered in this article is should women be ordained in the Church of England? It is not written in that form in the article but on the first page it says, ?the question regarding the ordination of women to the priesthood within the church continues to generate controversy within the Church of England[6]?. I do believe that this question is delivered with clarity and understanding. Some of the evidence that supports the declining of membership due to Ordaining of women is the support of woman ordination and against it in the bible, the historical context of the ordination of women, and the aspects of membership in the church. In the article the author stated that ?the underlying problems concerned with the ordination of women can be approached from a number of different perspectives including those of biblical theology[7]? the clergy is split between a strong case for women being ordained and woman not being ordained. In the historical context of woman ordination women have always been part of the three fold ministry since 1987 when they were permitted to enter the diaconate[8]. In many ways women have been accepted and welcomed with open arms into the ministry and in 1985 they were permitted to start being ordained deacons[9]. This was done because women were still considered to be under the leadership of a male. With the membership aspects the England Church was and still is strongly considering splitting the church in two one side for those who do not believe in the ordination and the other for those who support it and want to see it happen. ...read more.

This is all about social change and all of the examples are used by some type of social event that is going on in the world. Along with that you can make the assumption that the author is telling her readers that the social environment is a part of his or her ministry. And you can make the assumption that she also feels Women need to be liberated from not being able to be ordained because woman are just as equal to men when it comes to ministry[12]. This is said because the book talks so much about culture and social change along with the groups who wasn?t to be liberated and how it affects the ministry. Again one of the down falls is the lack of scriptures and lack of examples from the bible that backs up this claim. This is a huge blind spot. I do not think you can talk about someone being ordained to preach to the world and reach the masses if you do not provide scriptures to back up your claim. All throughout the book the author is only focused on the social change he or she want to see. What I have learned from this article that social change is very important to the ordination of women. Also those who are looking to make a difference do not have to sit behind a pulpit but can go into the world and be ordained to bring social change. You do not have to preach bible to be ordained by God. ...read more.