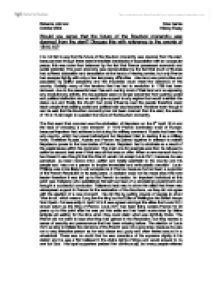 Would you agree that the future of the Bourbon monarchy was doomed from the start? Discuss this with reference to the events of 1814-15?

Would you agree that the future of the Bourbon monarchy was doomed from the start? Discuss this with reference to the events of 1814-15? It is not fair to say that the future of the Bourbon monarchy was doomed from the start, because even though there were immediate drawbacks of association with an unpopular peace, this was more than balanced by the fact that France possessed economic and social potential. The good economy was demonstrated by the fact that much of Europe had suffered dislocation and devastation at the hands of warring armies, but only France had escaped lightly with only a few temporary difficulties. Also land was productive and populated by skillful peasantry and the industries could meet the demands of the country. Socially many of the tensions that had led to revolution in 1789 had been removed, due to the peasants been free and owning most of their land and so apposing any revolutionary activity, the bourgeoisie were no longer prevented from gaining social and political distinction and so would give support to any regime that would maintain the status quo and finally the church had more influence over the people therefore could teach people that existing social and political role was important. ...read more.

These men were fairly wealthy and drew their income from ownership of land. Support would have to be gained by these people if the restoration was to be a success because they would lead the masses in supporting it. Louis however spoilt the support he gained from the population initially, due to the various mistakes he made and this questioned whether the Bourbon Monarchy would be likely to exist in the future. These mistakes consisted of changing the flag of France, re-introducing elements of the pre-revolutionary court ceremonial, which raised suspicions about what was likely to follow, reconstituting the Household Guard which made up several thousand aristocratic officers, meaning that the �migr�s would gain power in the near future and also constructed a preamble to the Charter of 1814. In this he declared that he had been put there by the Divine Right of Kings and not because of the people. Due to these mistakes he found himself fleeing to the safety of a foreign land and the protection of armies in Britain and Prussia. The departure of Louis XVIII had led to Napoleons return. ...read more.

The execution of Marshal Ney in December 1815 turned him into a martyr for the liberals. Even though the White Terror had not made the Restoration impossible it certainly ensured that a cohort of politically ambitious men were kept permanently alienated and excluded from public life. This was the situation Louis had hoped to avoid. The allies were proved right in saying that it will have been difficult for Louis XVIII to re-establish himself. In conclusion it can be seen that to a certain extent it is not entirely fair to assume that the future of the Bourbon Monarchy was doomed from the start. This was because despite the events that occurred during 1814-15 the economic and social aspects of France outweighed these. It is certain that the election of Louis XVIII was not a very good idea because even though he did make some changes, these did not pacify the people and due to his bad personality he was not well respected as a leader. This will have led to people questioning the future of the Bourbon Monarchy, but it will not have been definitely said that it was doomed for failure. ?? ?? ?? ?? Rebecca Johnson Miss Garvie October 2004 History Essay ...read more.