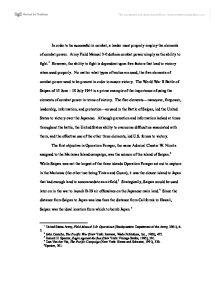 In order to be successful in combat, a leader must properly employ the elements of combat power. Army Field Manual 3-0 defines combat power simply as the ability to fight.1 However, the ability to fight is dependent upon five factors that lead to victory when used properly. No matter what types of tactics are used, the five elements of combat power need to be present in order to assure victory. The World War II Battle of Saipan of 15 June - 10 July 1944 is a prime example of the importance of using the elements of combat power in terms of victory. The five elements-maneuver, firepower, leadership, information, and protection-as used in the Battle of Saipan, led the United States to victory over the Japanese. Although protection and information lacked at times throughout the battle, the United States ability to overcome difficulties associated with them, and the effective use of the other three elements, led U.S. forces to victory. The first objective in Operation Forager, the name Admiral Chester W. Nimitz assigned to the Marianas Island campaign, was the seizure of the island of Saipan.2 While Saipan was not the largest of the three islands Operation Forager set out to capture in the Marianas (the other two being Tinian and Guam), it was the closest island to Japan that had enough land to accommodate an airfield.3 Strategically, Saipan would be used later on in the war to launch B-29 air offensives on the Japanese main land.4 Since the distance from Saipan to Japan was less than the distance from California to Hawaii, Saipan was the ideal location from which to bomb Japan. 5 As stated earlier, in order to achieve success on Saipan, US forces needed to employ the five elements of combat power effectively in order to gain the advantage over the Japanese. ...read more.

Thus, protection was not an element of combat power that flourished in the Battle of Saipan. Along with protection, the ability to maintain proper communication of information to friendly units was also weak in the Battle of Saipan. As an element of combat power, information is defined as the material that enhances leadership and magnifies the effects of maneuver, firepower, and protection.27 Throughout the battle, a number of communication problems constrained the United States from maximizing their combat potential. Along with the radio failure that was mentioned earlier in the attack on Ridge 300, Marine Corps aviators experienced difficulties in communicating information amongst themselves, as well. This was due to the fact that there existed only one radio frequency for forty-one air liaison teams.28 This put a significant strain on the aviators' ability to control Marine close air support, thus causing considerable delays in operations. Besides creating difficulty in the air, lack of communication significantly hindered the relaying of information on the ground, as well. On 23 June, one battalion of the 105th Infantry was assigned to "clean out Nafutan Point."29 However, difficulties in communications between Holland and Ralph Smith occurred that caused a confusion with orders of who was to do what and when.30 The consequence was the entanglement of the 106th and the 165th Infantry that caused the 27th ID to stall.31 While the Battle of Saipan was a success for the United States, it was not an example of how information was, or is, used in battle. In terms of the elements of combat power as a whole, the Battle of Saipan was an overall success. The integrated use of maneuver, firepower, and leadership in the battle are what propelled the United States to victory over Japan. ...read more.