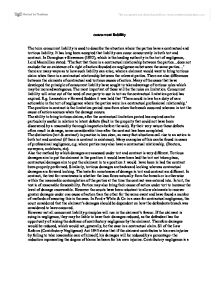 concurrent liability(TM) in tort and contract.

concurrent liability The term concurrent liability is used to describe the situation where the parties have a contractual and tortious liability. It has long been accepted that liability can occur concurrently in both tort and contract. In Donoghue v Stevenson (1932), which is the leading authority in the tort of negligence, Lord Macmillian stated: 'The fact that there is a contractual relationship between the parties...does not exclude the co-existence of a right of action founded on negligence as between the same parties...' there are many ways as to how such liability can arise, where a claimant would want to bring tortious claim when there is a contractual relationship between the relevant parties. There are also differences between the elements of contractual and tortious causes of action. Many of the cases that have developed the principle of concurrent liability have sought to take advantage of tortious rules which may be more advantageous. The most important of these will be the rules on limitation. Concurrent liability will arise out of the need of one party to sue in tort as the contractual limitation period has expired. E.g. Lancashire v Howard Seddon it was held that 'There could in law be a duty of care actionable in the tort of negligence where the parties were in a contractual professional relationship.' The position in contract is the limitation period runs from when the breach occurred whereas in tort the cause of action accrues when the damage occurs. ...read more.

clarified the position relating to concurrent liability. The claim related to Lloyds names bringing an action for negligence, under an agency agreement, against their 'managing agents'. The leading passage on concurrent liability was given by Lord Goff. He concurred with the statement made by Lord Oliver in Midland Bank Trust Co some years before, he stated that: 'where concurrent liability in tort and contract exists the plaintiff has a right to assert the cause of action that appears to be most advantageous to him in respect of any particular legal consequence.' He added to this statement: 'A concurrent or alternative liability in tort will not be admitted if its effects would be to permit the plaintiff to circumvent or escape a contractual exclusion or limitation of liability for the act or omission that would constitute the tort'. In the case of Holt v Payne (1996) the courts allowed a tortious liability to be wider than that under the contract, extending the position in Henderson. In Holt LJ said that: '...if the same parties enter a contractual relationship involving more limited obligations than those imposed by the duty of care in tort. Such circumstances, the duty of care and the duties imposed by contract will be concurrent and not co-existent'. The traditional distinction between tort and contract was that an obligation in contract was from the agreement or will of the parties, and an obligation in tort was imposed by law. However it is no longer possible to maintain this distinction. ...read more.