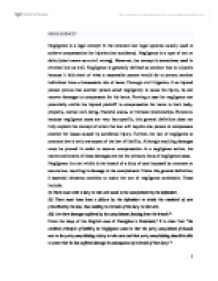 NEGLIGENCE1 Negligence is a legal concept in the common law legal systems usually used to achieve compensation for injuries (not accidents). Negligence is a type of tort or delict (also known as a civil wrong). However, the concept is sometimes used in criminal law as well. Negligence is generally defined as conduct that is culpable because it falls short of what a reasonable person would do to protect another individual from a foreseeable risk of harm. Through civil litigation, if an injured person proves that another person acted negligently to cause his injury, he can recover damages to compensate for his harm. Proving a case for negligence can potentially entitle the injured plaintiff to compensation for harm to their body, property, mental well-being, financial status, or intimate relationships. However, because negligence cases are very fact-specific, this general definition does not fully explain the concept of when the law will require one person to compensate another for losses caused by accidental injury. Further, the law of negligence at common law is only one aspect of the law of liability. Although resulting damages must be proved in order to recover compensation in a negligence action, the nature and extent of those damages are not the primary focus of negligence cases. Negligence is a tort which is the breach of a duty of care imposed by common or statute law, resulting in damage to the complainant.2 From this general definition, 3 essential elements combine to make the tort of negligence actionable. These include: (i) There must exist a duty to take care owed to the complainant by the defendant. (ii) There must have been a failure by the defendant to attain the standard of care prescribed by the law, thus leading to a breach of the duty to take care. (iii) Are there damages suffered by the complainant flowing from the breach?3 From the days of the English case of Donoghue v Stevenson,4 It is clear that "the cardinal principle of liability in Negligence cases is ...read more.

Even more precisely, if a breaching party materially increases the risk of harm to another, then the breaching party can be sued to the value of harm that he caused. Asbestos litigations which have been ongoing for decades revolve around the issue of causation. Interwoven with the simple idea of a party causing harm to another are issues on insurance bills and compensations, which sometimes drove compensating companies out of business. Legal Causation or Remoteness Sometimes factual causation is distinguished from 'legal causation' to avert the danger of defendants being exposed to, in the words of Cardozo, J., "liability in an indeterminate amount for an indeterminate time to an indeterminate class".16 It is said a new question arises of how remote a consequence a person's harm is from another's negligence. We say that one's negligence is 'too remote' (in England) or not a 'proximate cause' (in the U.S.) of another's harm if one would 'never' reasonably foresee it happening. A 'proximate cause' in U.S. terminology (to do with the chain of events between the action and the injury) is the same as the 'proximity test' under the English duty of care (to do with closeness of relationship). The idea of legal causation is that if no one can foresee something bad happening, and therefore take care to avoid it, how could anyone be responsible? For instance, in Palsgraf v Long Island Rail Road Co.,17 the judge decided that the defendant, a railway was not liable for an injury suffered by a distant bystander. The plaintiff, Palsgraf, was hit by scales that fell on her as she waited on a train platform. The scales fell because of a far-away commotion. A train conductor had run to help a man into a departing train. The man was carrying a package as he jogged to jump in the train door. The package had fireworks in it. The conductor mishandled the passenger or his package, causing the package to fall. ...read more.