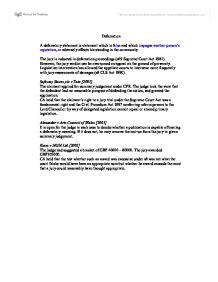 A defamatory statement is statement which is false and which impugns another person's reputation, or adversely affects his standing in the community.

Defamation A defamatory statement is statement which is false and which impugns another person's reputation, or adversely affects his standing in the community. The jury is inducted in defamation proceedings (s69 Supreme Court Act 1981). However, the jury verdict can be overturned on appeal on the ground of perversity. Legislative intervention has allowed the appellate courts to intervene more frequently with jury assessments of damages (s8 CLS Act 1990). Safeway Stores plc v Tate [2001] The claimant applied for summary judgement under CPR. The judge took the view that the defendant had no reasonable prospect of defending the action, and granted the application. CA held that the claimant's right to a jury trial under the Supreme Court Act was a fundamental right and the Civil Procedure Act 1997 conferring reform powers to the Lord Chancellor by way of delegated legislation cannot repeal or amend primary legislation. Alexander v Arts Council of Wales [2001] It is open for the judge in each case to decide whether a publication is capable of bearing a defamatory meaning. If it does not, he may remove the issi=ue from the jury to give a summary judgement. Kiam v MGM Ltd [2002] The judge had suggested a bracket of GBP 40000 - 80000. The jury awarded GBP105000. CA held that the test whether such an award was excessive under s8 was not what the court thinks would have been an appropriate sum but whether he award exceeds the most that a jury could reasonably have thought appropriate. When defamation is alleged, the burden of proving otherwise is on the defendant. Defamation: - Libel Refers to publications that are permanent in form or that are broadcasts on stage/screen over the airwaves (s4 Theatres Act 1968 and s6 Defamation Act 1952). - Slander Refers to publications in transient form (e.g. casual conversations). Generally, slander, unlike libel, gives rise to liability if it results in consequential loss (special damage). ...read more.

Edwards v Bell (1824) It is not necessary to prove the literal truth of a statement if the material facts proved true in substance. The defendant need only prove the facts, which justify 'the sting of the charge'. Allegations, which do not affect the claimant's reputation, will be disregarded. Alexander v NE Ry Co (1865) The defendant had published at their stations, a notice that stated that the plaintiff had been caught riding without a valid ticket and had refused to pay the fare, and subsequently been convicted by the magistrate, who sentenced him to pay a fine of $1 (plus cost) or suffer 3 weeks imprisonment. In fact, the plaintiff had been sentenced to fourteen days' imprisonment in default of payment. The plaintiff complained of the overstatement whose effect, he argued, was to make his offence more reprehensible than the justices had deemed it. The jury found for the defendant. Gwynn v SE Ry (1868) The allegation was that the plaintiff was sentenced to a fine of 1s or to 3 days' imprisonment with hard labour in default of travelling without a ticket. In fact, the allegation of hard labour was false. The jury found for the plaintiff and awarded GBP250. The defendant may widen the meaning of the words relied on by the plaintiff to show that they impute a more general wrongdoing than that imputed in a particular instance. Williams v Reason [1988] The allegation was that the plaintiff, an amateur rugby player had written a book for money and thereby compromised his status as a amateur. In pleading justification the defendant was allowed to introduce evidence showing the plaintiff to have received 'boot money' from a manufacturer of sports equipment was allowed. The sting of the libel was 'Shametuerism' and not merely the writing of the book. The meaning of the words complained of must always be assessed in light of the publication as a whole, and the precise context and circumstances of its communication. ...read more.

Vitzelli v Mudie's Select Library [1900] The defendants allowed people to use a book which, unknown to them, contained a libel on the plaintiff. IN a publication taken by the defendants the publishers had circulated a notice requesting the return of copies of the offending book HoL: The defendants had failed to establish their innocence and were found liable. They had no procedure for checking whether their books contained libels and they had overlooked the publisher's request for the return of the book. Freedom of Expression and Defamation The right to freedom of expression, by virtue of HRA 98 ECHR s10 (1) provides that everyone has the right to freedom of expression. However, the Convention also recognizes countervailing interests s10 (2). Thus, the courts have to address where to draw the line in balancing these tensions. The presumption appears to be in favour of freedom of expression. HRA 98 s12 (1) and s12(4) is actuated when such tensions appear. In Reynolds, it was conceded that 'the starting point is the freedom of expression...is the rule and regulation of speech is the exception requiring justification. The justification of any exception can only be justified if it is underpinned by a pressing social need'. It was also said that 'any curtailment must be convincingly established by a compelling countervailing consideration and that the means must be proportionate to the end sought. The liberty to communicate is important but not misinformation. Public interest is not served from dissemination of misinformation. It was also conceded that reputation is a matter of importance affecting the individual and his family. The Defamation Act 1996 introduced reforms to the law. A 'fast track procedure' enables the courts alone to dispose summarily of cases that are inordinately weak and provide 'summary relieve' for those that are inordinately strong. However, there is a restriction on maximum compensation that can be awarded (>GBP1000). This may limit the practical impact of the fast track procedure. However, this procedure also allows for a declaration of falsity and an order to publish an apology, which is not available to jury accessed damages. ...read more.