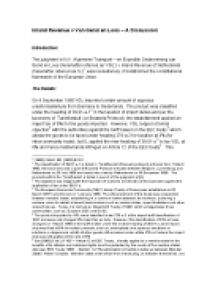 ﻿Inland Revenue v Van Gend en Loos ? A Discussion Introduction: The judgment in N.V. Algemene Transport ? en Expeditie Onderneming van Gend en Loos (hereinafter referred as ?VGL?) v Inland Revenue of Netherlands (hereinafter referred as ?IL?)[1] was revolutionary; it transformed the constitutional framework of the European Union. The Details: On 9 September 1960 VGL imported certain amount of aqueous ureaformaldehyde from Germany to Nederlands. The product was classified under the heading of 39.01-a-1[2] in the taxation of import duties and per the taxonomy of ?Tariefbesluit? (or Brussels Protocol); the establishment applied an import tax of 8% for the goods imported. However, VGL lodged a formal objection[3] with the authorities against the tariff based on the EEC treaty[4] which allows the goods to be taxed under heading 279-a-2 for taxation at 3% (for intra-community trade); but IL applied the new heading of 39.01-a [5] to tax VGL at 8% and hence Netherlands infringed on Article 12 of the EEC treaty[6]. This protest was dismissed in March 1961 due to inadmissibility,[7] VGL further appealed in ?Tariefcommissie? in April 1961, case heard in May 1962 and responded to VGL stating that the classification was based on heading 332 and not under 279-a-2, furthermore, the tariff levied on the goods was reduced from 10% to 8% under 332. ...read more.

Further, Article 12 allowed the members states to seen as subjects of the negative obligations and the argument of Benelux countries over Article 169 and 170 were termed as ?misconceived?[15]. Thus, Community law would triumph over any contradictory state laws even if amended at a later date. Through this, authority or proclamation of EU law is sought by limiting national sovereignty and would allow states or individuals to invoke their rights through EU courts and tribunals.[16] However, the Court did not give its judgment on the customs duty levied for VGL on the import of the product and asked the national courts to determine them in line with the interpretation of Article 12 (where ?individual rights must be protected by national courts?) given by the Court is higher than that of the duty levied whilst enforcing the treaty on 1 January 1958.[17] Conclusion: The judgment was revolutionary as it took radical measures in addressing two major issues; (1) there was no uniformity for the application of EU law by the national courts despite being a member state (at that time there were only 6 member states); and (2) lack of dominance granted to legal system of international law. The judgment by ECJ indicated that there is alternative forum for individuals and member states to invoke their rights and enforce them; this was followed and emboldened by ...read more.