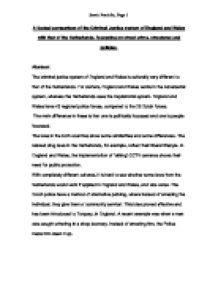 A factual comparison of the Criminal Justice system of England and Wales with that of the Netherlands, focussing on street crime, structures and policies.

A factual comparison of the Criminal Justice system of England and Wales with that of the Netherlands, focussing on street crime, structures and policies. Abstract The criminal justice system of England and Wales is culturally very different to that of the Netherlands. For starters, England and Wales works in the Adversarial system, whereas the Netherlands uses the Inquisitorial system. England and Wales have 43 regional police forces, compared to the 25 Dutch forces. The main difference in these is that one is politically focussed and one is people focussed. The laws in the both countries show some similarities and some differences. The relaxed drug laws in the Netherlands, for example, reflect their liberal lifestyle. In England and Wales, the implementation of 'talking' CCTV cameras shows their need for public protection. With completely different cultures, it is hard to see whether some laws from the Netherlands would work if applied in England and Wales, and vice versa. The Dutch police have a method of alternative policing, where instead of arresting the individual, they give them a 'community service'. This idea proved effective and has been introduced to Torquay, in England. A recent example was when a man was caught urinating in a shop doorway. Instead of arresting him, the Police made him clean it up. This report explains how comparative reports and studies are important and why they are still widely being used as a way of updating and expanding on existing laws and regulations. Contents Page 1 - Abstract. Page 2 - List of figures and graphs. Introduction. Page 3 - Introduction. Why do we do comparative studies? Page 4 - Methodology. Main discussion - adversarial vs. inquisitorial. Page 5 - Main discussion - Court systems and Police forces. Page 6 - Police training. Page 7 - Police training. Page 8 - Drug laws. Page 9 - Drug and prostitution laws. Page 10 - Prostitution. ...read more.

They can then apply to be an Assistant Police Officer, before progressing to Police Officer. The next rank is All-round Police Officer, followed by the Batchelor of Policing which takes 3-4 years. The final rank is Master of Science in Policing. The training system is obviously far more thorough in the Netherlands with more opportunities for promotion. There are many differences in the England and Wales vs. Netherlands systems of fighting crime, but it does not mean that one is right and one is wrong. As mentioned previously, the differences allow each force to reflect on their rules and regulations and to improve them if an alternative method proves to have better results. However, what works in one culture may not have the same effect if applied to another. Surprisingly, the drug and prostitution crime rates in the Netherlands are low. The Dutch view on drug abuse is a lot more liberal and relaxed than of that in the UK. Drug abuse is tackled by the Ministry of Health as opposed to the Ministry of Justice as it is in the UK. Since 1976, the Dutch laws allow the use of Cannabis as a controlled, soft drug. Possession and production of the substance are finable offences, however, according to their condolence policy, issued by the Dutch Ministry of Justice; one will not be prosecuted for the possession of a maximum amount of five grams of cannabis, intended for personal use. Also, a maximum of 5 plants can be grown without being prosecuted. In 1991, there were 4,261 criminal drug offenses. Of these 4,261, only 681 were soft drug offenses. When the drug was legalised, local business saw a demand for the substance and opened what appear as coffee shops, so by keeping in with the law, these shops can sell no more than 5 grams of cannabis to each customer. Because of the stricter drug laws on hard drugs such as ecstasy and heroin, coffee shops will not sell these substances. ...read more.

Limitations There are many limitations to carrying out a comparative study. Sometimes it is possible to find statistics for one year but not the same year for the other country. Another problem is that many crimes go unreported to the police and some reported crimes aren't actually illegal, so the statistics may not be completely accurate anyway. People will only report crimes if they know how to, i.e. which phone number to call and whether it was an act of criminal or lawful behaviour. This can also affect the outcome. However, the main limitation obvious to this report is that of the lack of primary resources. All resources used in this report were secondary, including journals, books and the internet. However, comparing England and Wales to the Netherlands makes it slightly easier as they are so culturally diverse and a lot of information is accessible for each system. Conclusions Major conclusions, refer back to original aims, recommendations to change. In conclusion, the Criminal Justice System of England and Wales is noticeably different to that of the Netherlands. The Dutch laws are considerably more liberal, which seem to work for their relaxed and open culture. Because of this, drugs, alcohol and sex are not taboo subjects as they are in the UK. The soft approach to drugs works in the Netherlands but if applied to the UK, would not have such a positive affect. As a larger amount of the population in England and Wales uses drugs, legalising Cannabis could create more problems than solutions. Also, due to the fact than more hard drugs are also used in England and Wales, a legalisation of a Class B substance may create the fa�ade that 'all' drugs are safe and inadvertently encourage drug usage. This shows that comparative studies are very helpful. They are not just used to determine whether something would work equally as well in another country, but also to disprove that statement. Also, it can be seen that England and Wales have more laws than the Netherlands. ...read more.