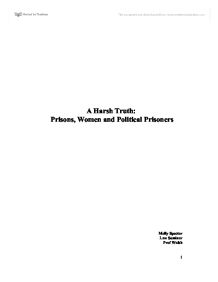 A Harsh Truth: Prisons, Women and Political Prisoners Molly Spector Law Seminar Prof Walsh Introduction I live in a safe world, a just world, a good world. That is what I have believed until recently. That is what I still desperately want to believe. The truth is harsh and cruel; it offers no solace, and destroys my faith in my country and the people governing it. The United States with its flags, its pride, its democracy, hides a great deal behind its stars and stripes. The US imprisons those who are not of the right skin color, class or political belief. Punishment is political. But, the imprisonment of individuals based upon their political ideologies, beliefs, and willingness to challenge the oppressive hegemony of the US deserve a separate distinction. It is the US' official stance that it does not have political crime or political prisoners. The US has a great deal of stake in denying certain individuals this right. For the voices of those who claim political prisoner status dare to oppose the almighty power of the US, who has knowingly raped, pillaged, and destroyed people, nations, and all that happens to get in its path. These people oppose the US' imperialistic policies and the degradation and mistreatment of minorities; they defend basic human rights, and the US will not stand for this. They wish these people to be forgotten, and all too often they are. It is a right of this country that people have freedom of speech, yet they are silenced. It is a right to a fair and impartial trial by a fair and impartial judge, but they have been denied this. Slowly and torturously the US prison system is trying to destroy these people's very essence - to institutionalize them so that when they leave they will not be able to function in society, let alone oppose it. It is an outrage. ...read more.

The Church Committee found that the FBI had "conducted a sophisticated vigilante operation aimed squarely at preventing the exercise of the First Amendment rights of speech and association, on the theory that preventing the growth of dangerous groups and the propagation dangerous ideas would protect the national security and deter violence... Many of the techniques used would be intolerable in a democratic society even if all of the targets had been involved in violent activity" (Church Committee). Before COINTELPRO was dissolved they were responsible for maiming, murdering, false prosecutions and framings, destruction, and mayhem throughout the country. It had infiltrated every organization and association that aspired to bring about social change in America through whatever means they deemed necessary. Many of today's political prisoners were incarcerated as a direct result of COINTELPRO's activities. They were targeted because of their political beliefs more so than their political actions. Unlike those convicted and sentenced for similar crimes, they were given much harsher sentences and routinely denied parole. ...the FBI actually gave covert aid to the Ku Klux Klan, Minutemen, Nazis, and other racist vigilantes. These groups received substantial funds, information, and protection - and suffered only token FBI harassment - so long as they directed their violence against COINTELPRO targets. They were not subjected to serious disruption unless they breached this tacit understanding and attacked established business and political leaders (Mazzone). The Church Committee ended its review of COINTELPRO concluding: "The American people need to be assured that never again will an agency of the government be permitted to conduct a secret war against those citizens it considers threats to the established order." That was just over twenty-five years ago. The American people are in need of reassurance once more. As if the prison situation was not completely unjust, immoral, and evil to begin with the outrages and false imprisonments increase in an attempt to find those responsible for the September 11 attacks on the World Trade Center and the Pentagon. ...read more.

This knowledge disrupts the belief in the US as a land of rights and freedom. Marilyn Buck is a political prisoner serving fifty years in addition to twenty years prior convictions for conspiring to commit bank robbery. When asked what she needs from people on the outside she responded: What I need from people is what we all need: to seize our human liberation as much as possible as women, as lesbians, as heterosexuals; to support the right of human beings to have their own nations, their own liberation, and their own justice. If we stopped police brutality; if Black women and men were treated like equal human beings, that would make me feel good, really good, because I would be less dehumanized as a white person in this society. I would not be objectified as the oppressor. I would like us to be more creative; to be the artists that we all are. I don't want to see child prostitution. That to me is oppression in the concrete; people having to sell their children to stay alive. Or watching their children in the clutches of the police. Or a woman standing on her feet as a waitress for ten hours a day when her veins are breaking and still no be able to pay the rent and be there for her children. I was thinking about this the other day - I think about the vision I had when I was a nineteen-year-old of justice and human rights and women's equality. It was a wonderful vision. I think how it got implemented - how we became rigid and rhetorical within that - took away from that vision. But without a vision, you can't go forward. A vision is needed. A revolution is needed. It is not enough for to have this knowledge, without acting upon it. To accept the oppression and unjust imprisonment of these individuals is to support the disparate relations of power that exist within the US, and within humanity itself. There is much to be done. ...read more.