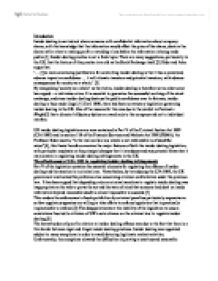 The Criminal Justice Act 1993 (CJA) and the Financial Services and Markets Act 2000 (FMA) does not sufficiently regulate insider dealing infringements in the UK.&quot;Discuss

Introduction Insider dealing is carried out where someone with confidential information about company shares, with the knowledge that the information would affect the price of the shares, deals in the shares with a view to making profit or avoiding a loss before the information is being made public.[1] Insider dealing practise is not a fresh topic. There are many suggestions, particularly in the UK, that the history of this practise is as old as the Stock Exchange itself.[2] Rider and Ashe argue that: '... [t]he main convincing justification for controlling insider dealing is that it has a perceived, adverse impact on confidence ... it will alienate investors and potential investors, with adverse consequences for society as a whole.' [3] By recognising 'society as a whole' as the victim, insider dealing is therefore not as what some has argued - a victimless crime. It is essential to guarantee the successful working of the stock exchange, and since insider dealing destroys the public confidence over its fairness, insider dealing is thus made illegal.[4] Until 1980, there had been no statutory legislation governing insider dealing in the UK. One of the reasons for this was due to the verdict in Percival v Wright[5] that a director's fiduciary duties are owed only to the company and not to individual member. UK insider dealing legislations are now contained in Part V of the Criminal Justice Act 1993 (CJA 1993) and in section 118 of the Financial Services and Markets Act 2000 (FSMA). As Professor Rider asserts, "in the real world a law which is not enforceable is of doubtful value"[6], this thesis therefore examine the major features of both the insider dealing legislation, with particular emphasis on the principal changes that it introduces and any potential flaws that it may contain in regulating insider dealing infringements in the UK. The effectiveness of CJA 1993 in regulating insider dealing infringements Part V of the legislation contains the essential elements for regulating the offence of insider dealing and the sanction is a criminal one. ...read more.

This would mean that criminal prosecutions would only be used in extremely serious case while other instances would be deal under the civil provisions, effectively avoiding the higher burden of proving beyond reasonable doubt the offence.[31] As mentioned earlier, criminal sanction under CJA 1993 may only attach to an individual. It was a major weakness of the legislation that it did not apply to corporations. The Market Abuse regime under FSMA filled up the loophole by making the offence of insider dealing applicable to most legal entities, including corporations and natural persons.[32] In addition, the FSMA market abuse and insider dealing provisions also have wider scope as compared to the previous legislation in CJA1993 as it apply not only to authorised persons, but also unauthorised persons who be involved in certain prescribed markets. As well as this, the insider dealing provisions under CJA 1993 are directed to corporate securities and derivatives on such securities only. FSMA again provides an apparent proof that its insider dealing provisions cover a wider range of actions as its provisions apply also to markets in commodity derivatives and financial futures which are of the same level of significance as that of corporate securities.[33] In general under the English law, an insider dealing infringements can only be punished if the dealing took place in the UK or when the insider engaged on the deal on a UK-regulated market or if the person dealing in the price-affected securities relies on a professional intermediary on a regulated UK market or is himself a professional intermediary. The coming into force of FSMA provides better regulation of insider dealing infringement as its provisions is extended to dealings occurred extraterritorial, making it an offence an insider dealing which takes place in a foreign jurisdiction but which might have an effect on UK markets. [34] A number of cases have come up after the promulgation of the FSMA and the most prominent among them is Hutchings and Smith.[35] Mr. ...read more.