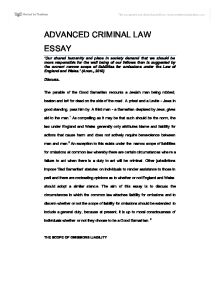 Our shared humanity and place in society demand that we should be more responsible for the well being of our fellows than is suggested by the current narrow scope of liabilities for omissions under the Law of England and Wales. (Anon., 2010

‘Our shared humanity and place in society demand that we should be more responsible for the well being of our fellows than is suggested by the current narrow scope of liabilities for omissions under the Law of England and Wales.’ (Anon., 2010)

The parable of the Good Samaritan recounts a Jewish man being robbed, beaten and left for dead on the side of the road. A priest and a Levite - Jews in good standing, pass him by. A third man - a Samaritan despised by Jews, gives aid to the man.[1]As compelling as it may be that such should be the norm, the law under England and Wales generally only attributes blame and liability for actions that cause harm and does not actively require benevolence between man and man.[2] An exception to this exists under the narrow scope of liabilities for omissions at common law whereby there are certain circumstances where a failure to act when there is a duty to act will be criminal. Other jurisdictions impose ‘Bad Samaritan’ statutes on individuals to render assistance to those in peril and there are contrasting opinions as to whether or not England and Wales should adopt a similar stance. The aim of this essay is to discuss the circumstances in which the common law attaches liability for omissions and to discern whether or not the scope of liability for omissions should be extended to include a general duty, because at present, it is up to moral consciousness of individuals whether or not they choose to be a Good Samaritan. [3]

THE SCOPE OF OMISSIONS LIABILITY

The Common Law under England and Wales recognises that criminal liability for omissions will only arise when there is a duty to act. It has been suggested that it is not entirely certain when a duty to act will arise [4] nevertheless, it is accepted that the following situations will prima face give rise to a duty to act;  where there is a special relationship, where responsibility has been assumed, where a duty has been assumed by contract and where the defendant has created a dangerous situation. [5]

Norrie suggests that the development of the modern approach to omissions liability under the Law of England and Wales is embedded in the 19th Century laissez-faire approach where the juridical basis for a duty to act was characterised by a strict contractual nexus.[6] A depiction of this contractual correlation can be found in the cases of R v Instan [1893] [7] and more evidently in R v Pittwood [1902].[8] In Instan the niece’s duty was discussed in broadly moral terms but the core of her responsibility for failing to act and look after her aunt was deemed to be because the aunt paid for the house and provided money to the niece for her and her niece’s upkeep. This agreement gave rise to an implied contract between the aunt and her niece which was broken when the niece failed to care for her. [9] In Pittwood even though the contract was between Pittwood and his employer; the court approached it and read in an implicit contract between Pitwood and the people who would be hurt if he did not stick to the terms of his employment. [10] This strict approach has created problems when attempting to attach liability in morally inexcusable situations whereby contractual elements are not as evident; this is well illustrated in Stone & Dobinson [1977]. [11] Two arguments were raised in order to attach criminal liability to the omissions of the defendants, thus being; the blood relationship between Stone and the deceased and the undertaking of care for the deceased by both defendants. Williams articulates that ‘there was a slide in the judgement between 'undertaking' in a practical and in a 'contractual' sense.’ In order to find liability the judges were forced to construe the contractualist approach to fit to the facts of the case.[12] The use of a contractual model arguably narrows the scope for liability and establishes that the existence of a duty to act only where a previous commitment has been voluntarily undertaken. This doctrine was however slightly widened by the decision in R v Miller [1983][13] and there is mixed academic opinion as to how liability was found in this case. Williams advocates for the 'continuing act' theory and that the whole course of conduct of the defendant should be viewed as one uninterrupted Actus Reus, thus liability was found for a positive act rather than for an omission. Smith claims that the harm is caused by the omission to take steps to avert the harm.[14] Norrie argues that there was still a free undertaking and that liability was found under a contractual interpretation. [15]

It is manifested in the Common Law that the law as it stands under England and Wales is narrow and largely restricted by archaic laissez-faire principles. To circumvent this ideology the law under England and Wales could follow in the footsteps of those countries that are more interventionalist and impose a general duty to act to those in peril; notably France and Germany where ‘Bad Samaritan’ laws are enforced. As defined by Malm, Bad Samaritan laws are ‘laws that oblige persons, on pain of criminal punishment, to provide easy rescues and other acts of aid for persons in grave peril.’[16]  These are not to be confused with ‘Good Samaritan’ laws which ‘provide a protection against liability for persons who non-negligently cause harm in the course of providing aid.’ [17] With Bad Samaritan laws the presumption is that we all owe a duty of care towards other people. Arguably such would provide for a stronger social well being and interconnectedness whilst recognising moral responsibility as well as strict legal duties towards one another. Duff claims that we can recognise a general moral responsibility to help others who are in serious need, in virtue of our common humanity, however the question is whether this paradigm should be legally enforceable.[18]

Attempts have been made by parliament to move towards ‘interdependence’ through enforcing various statute based duties where contract would provide little support. An example of such duties include inter alias: s.1 of the Children and Young Persons Act 1933, which not only forbids positive acts but also the unlawful neglect of a child under 16; s.170 of the Road Traffic Act 1988 prohibits the failure to stop at a road accident and s.6 of the same Act criminalises the failure to provide a breath sample or a specimen for analysis. Although these statutes impose liability for omissions they by no means represent a general duty to act amongst citizens.

In France Articles 62 and 63 provide for the offences of failure to report a serious crime, failing to take steps to prevent an offence from occurring and failure to assist persons in peril. [19] Article 63 (2) is our focus and this creates a general duty to render assistance to a person in peril, personally or by summoning help, where there is no personal danger to themselves or to others. Ashworth and Steiner provide guidance on when a victim will be in peril. Peril has to be ‘imminent’ which has been held to mean when there is serious fear about the life or physical safety of the victim. [20] Paralleling this, in Germany paragraph 323c of the Strafgesetzbuch also recognises the importance of providing assistance for those in danger. ‘Unterlassene Hilfeleistung’ penalises the failure to render assistance during accidents where it is possible without substantial danger to the individual.[21]

France and Germany show that bad Samaritan laws can operate successfully, however to incorporate their Law into our already developed system may be problematic as such a change would be very radical. Ashworth suggests that it would have to be supported by a programme of education and information arguably so individuals know what is required of them. [22] It has already been shown that omissions liability under the law of England and Wales is narrow in scope and based on contractual or quasi contractual relationships. If such a provision was to be adopted it would enable the law to be more interdependent.

Issues of uncertainty have arisen with regards to drug taking cases and how much assistance is required from drug dealers when their clients voluntarily choose to take drugs. In the case of R v Evans (Gemma) [2009][23] the mother and sister of the deceased were required at least to alert the emergency services when she showed symptoms of a life threatening overdose. If the presumption is that we owe a general duty to assist those in peril then the family members would have been compelled by law to alert the emergency services and ambiguity in this area would be clarified.

Ashworth identifies two contrasting positions - the ‘conventional view’ and the ‘social responsibility view’, which he claims are not polar opposites but represent the different arguments regarding the extent to which duties should be recognised. [24] The conventional view, he argues requires special justification, for the criminal law to impose duties to assist other individuals and should be confined towards those for whom we have voluntarily assumed some responsibility. [25] In comparison the ‘social responsibility view’ argues that it may be fair to place citizens under obligations to render assistance to other individuals in certain situations. According to Ashworth the argument grows out of ‘a communitarian social philosophy which stresses the necessary interrelationship between individual behaviour and collective goods.’ [26]

This essay was by no means an exhaustive discussion of omissions liability; possible defences to a general duty to assist have not been discussed nor have the complex issue of causation and the distinction between acts and omissions. It has however been shown that that the law on omissions liability under England and Wales is narrow and characterised by contractual liberal ideology. The ‘social responsibility’ view asserts that we should be more responsible for individuals in our community by recognising a general duty to assist those in peril. The view enhances general social welfare and solidarity and the writer is of the opinion that such should be recognised. Ultimately, our ‘social responsibility’ for one another should demand that we be more responsible for the well-being of our fellows than is suggested by the current narrow scope of omissions liability and the ‘restriction’ to ones autonomy is justified for the reasons aforementioned.