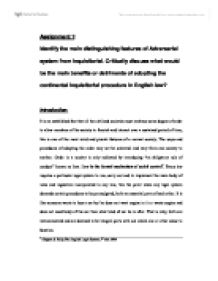 Assignment 1: Identify the main distinguishing features of Adversarial system from Inquisitorial. Critically discuss what would be the main benefits or detriments of adopting the continental inquisitorial procedure in English law? Introduction: It is an established fact that all the civilized societies must embrace some degree of order to allow members of the society to flourish and interact over a sustained period of time; this is one of the most vivid and pivotal features of a normal society. The ways and procedures of adopting the order may not be universal and vary from one society to another. Order in a society is only achieved by introducing "an obligatory rule of conduct" known as Law. Law is the formal mechanism of social control1. Every law requires a particular legal system to run, carry out and to implement the main body of rules and regulation incorporated in any law, this the point when any legal system demands certain procedures to be promulgated, both are essential parts of each other. It is like someone wants to buy a car but he does not want engine in it or wants engine and does not need body of the car then what kind of car he is after. That is why, both are interconnected and are deemed to be integral parts with out which one or other cease to function. 1 Slapper & Kelly,The English Legal System,7th edn 2004 There is always a need of mechanism of interconnecting two different things in order to keep smooth functioning of any system with out interfering into others' sphere of authority or rendering one or other completely redundant and un-operational by making them two absolutely distinctive bodies, foreign to each other. So, a very care full cross matching balance would be required to provide ones' support for other e.g. substantive law and procedure law are two separate bodies of the legal system but each has inherent support for the other (substantive law helps to recognize the crime or right and procedural law provides track how to punish and up hold a right ). ...read more.

As through out this comparison I have been focusing on criminal case that's why I would confine my self to only criminal case once again, same principles are applied to civil case as well. In criminal cases in continental inquisitorial system a dossier is prepared by an examining magistrate which is called le juged'instructuion (France), in Italy it is known as the giudice istruttore. The purpose of this document (dossier) is to make the court fully conversant with fact of the case, which contains the pre-trial investigation, the dossier is ready before the trial commences formally by a presiding judge who uses it on his disposal to call and question the witnesses. The accused himself is dragged into the process of making this dossier and as result of that the accused can be held in custody for exhausting length of time. The detention with out is not regard as the prerequisites of a trial in the inquisitorial system but the system itself assumes that it will quite handy for juged'instructuion to have suspect available whenever he needs.The examining magistrate (juged'instructuion) see the witnesses and record their statements. In France there are three tiers of criminal offences: 1: Gravity -crimes, with the punishment of five years or more. 2: delits, with the imprisonment of two months or more. 3: contraventions, with minor summary trials cases. The juged'instructuion is operative in all gravity crimes and delits, the decision that in which cases the juged'instructuion can jump into is left with prosecutor, the behind this exercise of power is depending upon the nature of case. In certain case the prosecutor has absolute powers to investigate and involve the police with out the prior authority of the juged'instructuion. There are benefits and detriments attached with this system as there is always a case with each and every kind of legal system. If the juged'instructuion performing his legal powers they are impressive as well as alarming. ...read more.

limits.None of the system is absolute in its nature that's why the legal systems which follows the adversary methods some times has justfied the inquisitorial approach and vise versa. Being a 8 'The passive court and legal argument' Civil Justice Quarterly, 1988,p125 student of law I see that legal systems are transfermed by evolutionary growth and course of justice,one can not sit and draw the logistics of a legal system,it is only by continuous process which shapes it up. It will be impossible to restrain one legal system to purely one set of method,any system should be adaptable to changing needs and circumstance with in the boundaries of certain restrains, because drastic deviation from one system to other or too much of amalgamation of the legal systems may give rise to futher legal complications and we all know that "not all cocktails are good". The complete transformation or the too much transformation may distort the real value and essence of any legal system which designed to server certain purposes and to meet certain objests. What is good in france may not be good English system,when ever these system are formulated there are few other considerations in the mind of creating body,they always keep in sight the cultural and traditonal values and usages of that society other wise that system is not going to last long. No system can last against the popular will of a society.Best systems are always those which are the product of evolutionary growth over a sustained period of time.English legal system is the best example of the evolutionary system over the periods of centurie,.even after the prolonged period of time If some thinks that continuous process change has to end, it is not possible because the only is permanent in this world and that is change.All the changes are not pleasant, so it must be done in a very carefull manner because if justice is not done and not seen to done this may endanger the integrity of the society. ...read more.